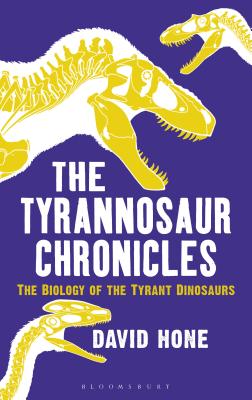 In the mid-nineteenth century, many dinosaur fossils were found in the United States, especially during the 1870s and 1880s "Bone Wars." Paleontologists Edward Drinker Cope and Othniel Charles Marsh discovered dozens of skeletons, but in 1905, fossil hunter Barnum Brown named the first tyrannosaur known to science--Tyrannosaurus rex.

Tyrannosaurus was an impressive beast; it topped five tons, was more than thirty-five feet (twelve meters) long, and had the largest head and most powerful bite of any land animal, ever. Tyrannosaurs started small, just a couple of yards long, and over the course of 100 million years, evolved into giant meat-slicing bone crushers.

As of 2015, there were nearly 30 described species of tyrannosaur, but during the last decade at least one new species has been identified and named every year, greatly improving what we know about how they lived, fed, bred, and died. THE TYRANNOSAUR CHRONICLES tracks the rise of these dinosaurs, and presents the latest research into their biology, showing off more than just their impressive statistics--tyrannosaurs had feathers, and fought and even ate one another. Indeed, David Hone tells the evolutionary story of the group through their anatomy, ecology, and behavior, exploring how they came to be the dominant terrestrial predators of the Mesozoic--and more recently, one of the great icons of biology.

David Hone is rapidly becoming the "face" of dinosaur research. Based at Queen Mary University of London, he is a lecturer in ecology. He has published more than fifty academic papers on dinosaur biology and behavior, with a particular focus on tyrannosaurs. His fieldwork has included working on the famous feathered dinosaur deposits of China. His writing credits include the BBC’s "Walking with Dinosaurs" and articles in New Scientist and The New York Times. He lives in London, England.

"For readers who got hooked on tyrannosaurs as 5-year-olds, and want to know more at 15 or 50, this book is a useful introduction to some of the most wonderfully terrifying animals ever to walk the Earth." - The Wall Street Journal

"THE TYRANNOSAUR CHRONICLES will engage the casual dinosaur enthusiast and the reader desiring in-depth explanations and bibliographic detail. Hone’s careful speculation, his clear prose and his occasional whimsy . . . make this an illuminating and enjoyable guide to the lifestyle of everyone’s favorite theropod." - The Minneapolis Star Tribune

"If most of what you know about Tyrannosaurs is based on old Japanese movies or the Jurassic Park franchise, there will be many surprises . . . a welcome touchstone volume for lovers of the terrible lizards." - Natural History Magazine

"David Hone's fantastic book is much more than just a celebration of the most charismatic of dinosaurs . . . THE TYRANNOSAUR CHRONICLES presents scientific investigation as a thrilling combination of discovery and informed guesswork. The book's subject would have ignored its prose and eaten its author, but everybody else will love it." - Christian Science Monitor

"Tyrannosaurs are probably the world’s favorite dinosaurs. But what do we really know about this group? David Hone reviews the biology, history, evolution, and behavior of the tyrant kings – an excellent read, containing the very latest in our understanding of Tyrannosaurus rex and its closest relatives." - Dr. Tom Holtz, University of Maryland

"Hone, a lecturer in ecology at Queen Mary University of London, lets his dinosaur-obsessed inner child run wild in this well-organized, up-to-date fact book about Tyrannosaurus rex and its 25 or so near relatives . . . Hone provides a solid meal to feed the popular fascination with these tyrant lizards, easily digestible but made from ingredients that, at least in paleontological terms, are quite fresh." - Publishers Weekly

"Our fascination with Tyrannosaurus rex, the aptly named king of the dinosaurs, has been fed by Jurassic Park and other films, but the reality is equally entrancing . . . Hone successfully integrates two equally fascinating stories: how our knowledge of these fabulous creatures was pieced together over time and what we can infer about them." - Kirkus Reviews

"Hone’s book is an in-depth portrait that treats the entire [Tyrannosaurus rex] group in four sections focused on, respectively, the definition, morphology, ecology, and future study of these “king” theropods (i.e., “wild-foots--carnivorous dinosaurs) . . . He happily asserts his continuing fascination with tyrannosaurs and mightily piques ours." - Booklist

"This volume is the go-to for tyrant dinosaurs." - Library Journal