Enemy of the State (A Mitch Rapp Novel #16) (Hardcover) 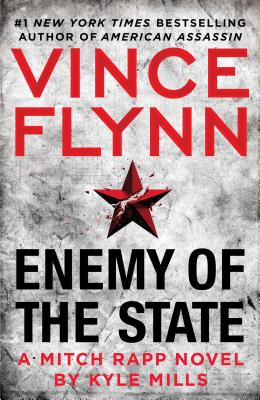 This is book number 16 in the A Mitch Rapp Novel series.

In the #1 New York Times bestselling series’ latest thriller, Mitch Rapp finds himself alone and targeted by a country that is supposed to be one of America’s closest allies.

After 9/11, the United States made one of the most secretive and dangerous deals in its history. The evidence against the powerful Saudis who coordinated the attack would be buried. In return, King Faisal would promise to keep the oil flowing and deal with the conspirators in his midst.

When the king’s own nephew is discovered funding ISIS, the president suspects that the Saudis never intended to live up to their agreement. He decides that the royalty needs to be sent a message and that Mitch Rapp is just the man to deliver it. The catch? America can’t be seen moving against an ally. Rapp will be on his own. Forced to make a decision that will change his life forever, Rapp quits the CIA and assembles a group of independent contractors to help him complete the mission.

They’ve barely begun unraveling the connections between the Saudi government and ISIS when the brilliant new head of the intelligence directorate discovers their efforts. With Rapp getting too close, he threatens to go public with the details of the post-9/11 agreement between the two countries.

Facing an international incident that could end his political career, the President orders America’s intelligence agencies to join the Saudis’ effort to hunt the former CIA man down.

Rapp, supported only by a team of mercenaries with dubious allegiances, finds himself at the center of the most elaborate manhunt in history. It’s only a matter of time before he’s caught or killed. Will it be enough to turn the tables on the Saudis and clear his name?

"Series fans and newcomers alike will watch in wonder as Mitch Rapp executes a clever plan that leads to an explosive climax."
— Publishers Weekly

"In the world of black-ops thrillers, Mitch Rapp continues to be among the best of the best."
— Booklist (starred review)

"This novel perfectly combines geo-politics, covert operations, and the backstory of the characters. Readers can close their eyes and remember past books written by Vince Flynn and will not skip a beat with Kyle Mills at the helm."
— Crimespree Magazine