Author in Chief: The Untold Story of Our Presidents and the Books They Wrote (Hardcover) 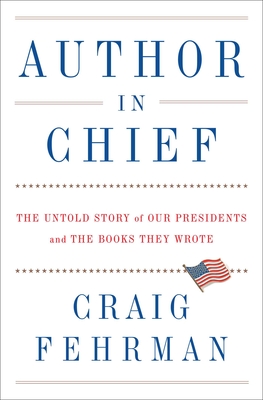 “Fascinating and engaging, Chris Fehrman’s Author in Chief delivers unique insights into U.S. politics, history, and publishing. Fehrman shows that analyzing our presidents as authors first provides understanding and appreciation into their personal lives and motivations, but also into how those motivations greatly influenced our country as a whole. Proving that books can indeed change the world, Author in Chief is a perfect combination of history, politics, and bibliophilia.”
— Katerina Argyres, Bookshop West Portal, San Francisco, CA

“One of the best books on the American presidency to appear in recent years.” —Thomas Mallon, The Wall Street Journal

“Fun and fascinating…It’s witty, charming, and fantastically learned. I loved it.” —Rick Perlstein

Based on a decade of research and reporting, Author in Chief tells the story of America’s presidents as authors—and offers a delightful new window into the public and private lives of our highest leaders.

Most Americans are familiar with Abraham Lincoln’s famous words in the Gettysburg Address and the Eman­cipation Proclamation. Yet few can name the work that helped him win the presidency: his published collection of speeches entitled Political Debates between Hon. Abraham Lincoln and Hon. Stephen A. Douglas. Lincoln labored in secret to get his book ready for the 1860 election, tracking down newspaper transcripts, editing them carefully for fairness, and hunting for a printer who would meet his specifications. Political Debates sold fifty thousand copies—the rough equivalent of half a million books in today’s market—and it reveals something about Lincoln’s presidential ambitions. But it also reveals something about his heart and mind. When voters asked about his beliefs, Lincoln liked to point them to his book.

In Craig Fehrman’s groundbreaking work of history, Author in Chief, the story of America’s presidents and their books opens a rich new window into presidential biography. From volumes lost to history—Calvin Coolidge’s Autobiography, which was one of the most widely discussed titles of 1929—to ones we know and love—Barack Obama’s Dreams from My Father, which was very nearly never published—Fehrman unearths countless insights about the presidents through their literary works.

Presidential books have made an enormous impact on American history, catapulting their authors to the national stage and even turning key elections. Beginning with Thomas Jefferson’s Notes on the State of Virginia, the first presidential book to influence a campaign, and John Adams’s Autobiography, the first score-settling presiden­tial memoir, Author in Chief draws on newly uncovered information—including never-before-published letters from Andrew Jackson, John F. Kennedy, and Ronald Reagan—to cast fresh light on the private drives and self-doubts that fueled our nation’s leaders.

We see Teddy Roosevelt as a vulnerable first-time author, struggling to write the book that would become a classic of American history. We see Reagan painstakingly revising Where’s the Rest of Me?, a forgotten memoir in which he sharpened his sunny political image. We see Donald Trump negotiating the deal for The Art of the Deal, the volume that made him synonymous with business savvy. Alongside each of these authors, we also glimpse the everyday Americans who read them.

Combining the narrative felicity of a journalist with the rigorous scholarship of a historian, Fehrman delivers a feast for history lovers, book lovers, and everybody curious about a behind-the-scenes look at our presidents.

Craig Fehrman, a journalist and historian, spent more than a decade immersed in the presidents’ writings to produce his first book, Author in Chief, which was described by Thomas Mallon in The Wall Street Journal as “one of the best books on the American presidency to appear in recent years.” Fehrman lives in Indiana with his wife and children.

"One of the best books on the American presidency to appear in recent years. . . . Delightfully instructive.”
—Thomas Mallon, The Wall Street Journal

“Joyfully engrossing . . . Juicy controversies and conversation-starters are the consistently found treats of Author in Chief, regardless of where you find yourself on the political spectrum. And the implication throughout—that books are vitally important to the nation’s soul—will surely appeal to red and blue state readers alike.”
—Steve Donoghue, Christian Science Monitor

“A breezy, anecdote-rich account of the memoirs and autobiographies that have helped candidates running for office . . . Most presidents’ books have aimed to entertain, and that might also be said of Author in Chief. But Fehrman has done his homework. His bibliographical essays are impressively thorough, particularly on works on the study of writing, publishing and reading. His readers will learn a lot.”
—The Washington Post

“Credit to Craig Fehrman for the compendiousness, readability, and general exuberance of his Author in Chief.”
—James Parker, The Atlantic

“If you’re a history buff, a presidential trivia aficionado, or just a lover of American literary history, this book will transfix you, inform you, and surprise you.”
—Paul Constant, The Seattle Review of Books

“Fehrman examines the writing by every United States president, situating each within his historical context—and revealing vanities, insecurities, and intrigues along the way. Taking us on a journey from a bygone era when books were peddled on the back of a wagon rolling through the undeveloped countryside, to the modern rise of the eight-figure blockbuster book deal, Fehrman reveals that presidents and their words are as subject to history as they are shapers of it.”
—Andrew Heisel, The Yale Review

“Fehrman offers a decade of painstaking research boiled down into a supremely engaging narrative about presidents and their relationship to reading and writing.”
—Rebecca Rego Barry, Fine Books Magazine

“Fehrman discovered that one of the best ways to understand a nation’s history is to read the books their leaders penned. . . . Author in Chief, a compelling history of presidential books, is perhaps more accurately described as a love letter to the power of the written word.”
—Caleb Gotthardt, Bookbub

“Author in Chief is an absolutely absorbing read. . . . It’s a years-long undertaking packed with an incredible depth of research and thoughtful analysis, all of it devoted to exploring the literary output of our presidents. Fehrman walks us through the entirety of American history . . . The combination of exceptionally detailed research and well-crafted prose results in a truly engaging work of nonfiction. It’s a fascinating look at American history that isn’t quite like anything you’ve read before, a chance to view the men who have led this country through a different and very specific lens.”
—Allen Adams, The Maine Edge

“Entertaining and illuminating . . . Fehrman’s deep research delivers a wealth of intriguing tidbits (Jimmy Carter leased a $12,000 word processor to compose Keeping the Faith; the Committee to Boycott Nixon’s Memoirs sold T-shirts and bumper stickers with the slogan “Don’t Buy Books by Crooks”), which are complemented by a generous selection of illustrations. Bibliophiles and presidential history buffs alike will relish this gratifying deep dive into an underappreciated genre.”
—Publishers Weekly (starred review)

“From the very beginnings of America’s experiment in republican government, its chief executives, both actual and aspiring, have put pen to paper (nowadays fingers to keyboard) in attempts to justify themselves and inspire others. Here, Fehrman records such literary efforts back to Jefferson and Adams. . . . Both history buffs and politics enthusiasts will relish this.”
—Booklist (starred review)

“A lively account of the literary achievements (and failures) of America’s presidents. . . . The author covers a great deal of ground that even major biographers have skipped over in favor of ‘sexier’ storylines, yet to the book lover, these stories will be unquestionably enticing. Even the footnotes, appendix, and sources offer bookish gems. Fehrman’s illuminating blend of presidential and publishing history with literary criticism will appeal to amateur historians and bibliophiles alike.”
—Kirkus Reviews

“Conversational, engaging, and compelling, backed by extensive research and appendices . . . Bookworms, lovers of history, and political junkies will find a lot to like here.”
—Indianapolis Monthly

“[An] eye-opener of a read . . . For both the scholar and the casually curious, there is a lot to learn about our presidents. . . . There are the predictable standouts—Washington, Jefferson, Lincoln, Grant, Roosevelt, and Kennedy—and some outstanding surprises, such as Coolidge, Truman, and Reagan.”
—BookPage

“Original, illuminating, and entertaining—as good history can be—Craig Fehrman’s Author in Chief is a book that should have been written, and should surely be read. By looking at presidents through the prism of their published writings, Fehrman throws new light on what John F. Kennedy—himself an author-president—called  ‘the vital center of action.’ ”
—Jon Meacham, author of The Soul of America

“Craig Fehrman takes us from Thomas Jefferson—a president who happened also to be the best prose stylist around—to the age of the obligatory campaign biography, on to the modern blockbuster. Along the way we meet revisionists, ghost writers (Truman went through four), runaway bestsellers (it seems there was a sport at which Calvin Coolidge excelled), surprising flops.  We learn that the Civil War turned the occasional authorial impulse into a flood of literature; that Nathaniel Hawthorne quietly wrote a campaign biography; that the most literate presidents can meet with the worst reviews. Shapely, original, and brimming in anecdote, Author in Chief expertly illuminates, amid much else, how history finds its way into the books.”
—Stacy Schiff, author of The Witches

“This book is just as fun and fascinating when taking you inside the minds of presidents as into ordinary eighteenth-century bookworms. It’s witty, charming, fantastically learned, and engrossing. I loved it.”
—Rick Perlstein, author of Nixonland

“CAUTION: This book contains material highly addictive to history lovers. From its account of Thomas Jefferson’s monumental efforts to bring out his Notes on the State of Virginia, to the description of John Kennedy’s fraudulent claims about writing Profiles in Courage, Craig Fehrman’s Author in Chief achieves what every original thesis should. The accumulated myths that we call our history are shattered by the recovery of the true facts. I’m annoyed right now that I didn’t write this disciplined, enormously engaging narrative myself.”
—Rinker Buck, author of The Oregon Trail

“Author In Chief takes the reader into the hearts and minds of America’s presidents as they seek to define their legacies through literature. From Lincoln and Kennedy to Bush and Obama, Fehrman brings these men to life and allows us to see their struggles and revel in their successes. It offers an entirely new perspective into what it feels like to be president and how critical self-expression is to the study of American history.”
—Kate Andersen Brower, author of The Residence, First Women, and First in Line

“This engrossing and delightful work offers a fresh lens on famous presidents and a new understanding of obscure ones. Fehrman explains how the uneven written work of presidents—original and ghostwritten—reveals the curious intersection of power and publishing.”
—Jonathan Alter, author of The Promise

"A delightful contribution to the literature . . . Author in Chief, a labor of love that took journalist and historian Craig Fehrman ten years to write, is far more than just a jaunty tour through presidents, their books, and their American readership, although it is that. It is also a smart exploration of how the roles of both books and the presidency in American life have evolved throughout our history."
—Tevi Troy, Claremont Review of Books

"A compelling contrary argument . . . Fehrman’s engaging and learned narrative reminds us that, with some exceptions, these longer presidential communications let us see presidents 'at their most human . . . their most ambitious and their most reflective.'"
—Jeff Kehoe, Harvard Business Review