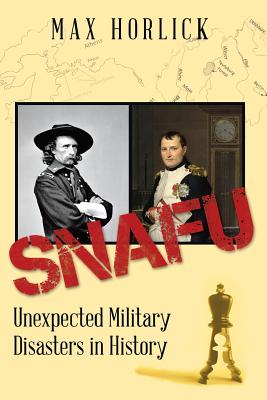 Shooting and being shot may seem an integral part of war, but they may not necessarily be the most essential elements of a struggle. There is always the hidden war behind the war. Veterans of wars know that in wartime, normal is not normal. Fouled up is normal. During the Second World War, these mistakes became labeled as SNAFUs.

Max Horlick, who once fought in the Battle of the Bulge, shares narratives of ten historic battles covering from 450 BCE to 1945, in which the superior forces lost and often encountered the same flaw. While leading others through each battle, Horlick illustrates that generals, kings, presidents, and others in charge made terrible military decisions that caused soldiers to suffer. In the Battle of the Bulge, Eisenhower did not heed intelligence. On the other hand, Custer lost at Little Big Horn because he did. Other narratives highlight additional memorable battles such as Saratoga and the American Revolution, Agincourt and Shakespeare, Napoleon in Russia, and the battle of Salamis and Xerxes.

SNAFU shares ten insightful and colorful tales of military battles, leaders, and the decisions that changed the course of history around the world.

Max Horlick received training at the secret Camp Ritchie Military Intelligence Training Center; served in the European Theater of Operations in military intelligence in France, Belgium, and Germany; and fought in the Battle of the Bulge. He earned a PhD from Columbia University in 2007, retroactive to 1954. He wrote SNAFU, his third book, at the age of 99. Max Horlick passed away in April 2018 at the age of 100 as his book went to press.