Marianne Is Watching: Intelligence, Counterintelligence, and the Origins of the French Surveillance State (Studies in War, Society, and the Military) (Hardcover) 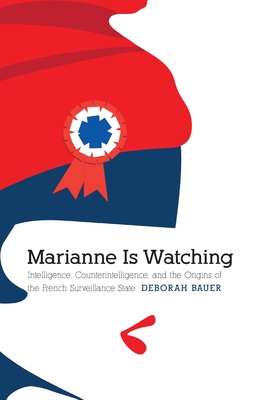 Professional intelligence became a permanent feature of the French state as a result of the army’s June 8, 1871, reorganization following France’s defeat in the Franco-Prussian War. Intelligence practices developed at the end of the nineteenth century without direction or oversight from elected officials, and yet the information gathered had a profound influence on the French population and on pre–World War I Europe more broadly.

In Marianne Is Watching Deborah Bauer examines the history of French espionage and counterespionage services in the era of their professionalization, arguing that the expansion of surveillance practices reflects a change in understandings of how best to protect the nation. By leading readers through the processes and outcomes of professionalizing intelligence in three parts—covering the creation of permanent intelligence organizations within the state; the practice of intelligence; and the place of intelligence in the public sphere—Bauer fuses traditional state-focused history with social and cultural analysis to provide a modern understanding of intelligence and its role in both state formation and cultural change.

With this first English-language book-length treatment of the history of French intelligence services in the era of their inception, Bauer provides a penetrating study not just of the security establishment in pre–World War I France but of the diverse social climate it nurtured and on which it fed.

Deborah Bauer is an associate professor of history at Purdue University Fort Wayne.

"Based on an excellent use of national defense, foreign office, and police archives and departmental archives in Nancy and Nice, this carefully researched book considers both the French security establishment and the social climate that helped to make it possible."—S. L. Harp, Choice

"Bauer has done critical archival work by painstakingly resurrecting the history of intelligence institutions for future scholars of French military intelligence. But this book will also be essential reading for students of French, German, and European history as well as the growing number of students and scholars interested generally in surveillance and intelligence. Marianne is Watching reminds us that our cultural fascination with spies and spying may seem benign entertainment, but its history is one of military expansion and xenophobia that is romanticized to compel people to believe in a powerful nationalist state."—Kathleen Keller, H-France Review

“A powerful book on an important subject. Marianne Is Watching is both a political history of intelligence as a potential force multiplier in international affairs and a social history of fin-de-siècle France. This is a very impressive piece of work.”—Martin Thomas, editor of The French Colonial Mind, Volumes 1 and 2

“Marianne Is Watching contributes to the emergence of a new total military history. Bauer’s combination of meticulous multi-archival research and her ability to fuse government archives and popular writing about espionage makes her work a major advance. Connecting the internal history of military and civilian intelligence to the broader politics of the regime provides fresh insights into how military and official culture and politics shaped the life of the Third Republic. This is important work.”—Andrew Orr, author of Women and the French Army during the World Wars, 1914–1940