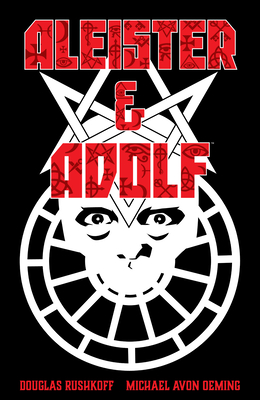 Media theorist and documentarian Douglas Rushkoff weaves a mind-bending tale of iconography and mysticism against the backdrop of a battle-torn Europe. In a story spanning generations, and featuring some of the most notable and notorious idealists of the 20th century, legendary occultist Aleister Crowley develops a powerful and dangerous new weapon to defend the world against Adolf Hitler's own war machine spawning an unconventional new form of warfare that is fought not with steel, but with symbols and ideas. Unfortunately, these intangible arsenals are much more insidious and perhaps much more dangerous than their creators could have ever conceived.

"Rushkoff is a cultural treasure and an eccentric author of big, strange ideas, never less than fascinating and always entertaining." -Warren Ellis, author of Gun Machine, Red, Trees, and Transmetropolitan

"Douglas has been one of my personal heroes, and I've been a most attentive reader of anything he cares to put between covers, knowing that his combination of a cold eye and a warm heart is guaranteed to astonish and embolden my own thinking about what's possible in the world--about what's possible to enact in the space between one human being and another. He occupies the ground of our most immediate perplexities, and his reports of what he finds are breaking news." -Jonathan Lethem, author of The Best American Comics and The Fortress of Solitude

Douglas Rushkoff is the author of Present Shock: When Everything Happens Now as well as a dozen other bestselling books on media, technology, and culture, including Program or Be Programmed, Media Virus, Life Inc and the novel Ecstasy Club. He is Professor of Media Theory and Digital Economics at CUNY/Queens. He wrote the graphic novels Testament and A.D.D., and made the television documentaries Generation Like, Merchants of Cool, The Persuaders, and Digital Nation. He lives in New York, and lectures about media, society, and economics around the world.