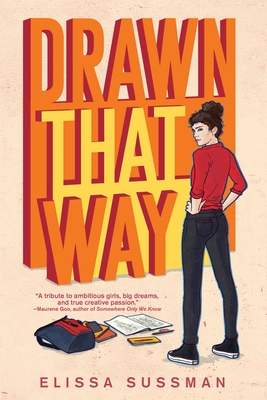 “Packs a swoony punch along with its feminist rage.” —Maurene Goo, author of Somewhere Only We Know

Moxie meets the world of animation in this fresh, unputdownable novel about a teen girl determined to prove herself in the boys’ club of her dream industry no matter what it takes.

Hayley Saffitz is confident, ambitious, and intent on following in the footsteps of her hero, renowned animation director, Bryan Beckett. When she’s given a spot in his once-in-a-lifetime summer program, Hayley devises a plan: snag one of the internship’s coveted directing opportunities. Dazzle Bryan with her talent. Secure a job post-graduation. Live her dream.

Except she doesn’t land one of the director positions. All of those go to boys. And one of them is Bryan’s son, Bear. Despite Bear’s obvious apathy for the internship, Hayley soon realizes that there’s more to him than she expected. As they work together, the animosity between them thaws into undeniable chemistry and maybe something…more.

But Hayley can’t stop thinking about the chance she was refused.

Determined to make a name for herself, Hayley recruits the five other young women in the program to develop their own short to sneak into the film festival at the end of the summer. As the internship winds down, however, one question remains: Will Hayley conform to the expectations of her idol, or will she risk her blossoming relationship with Bear—and her future—to prove that she’s exactly as talented as she thinks she is?

Elissa Sussman is a bestselling author of books for adults and teens. She received her BA from Sarah Lawrence College, her MFA from Pacific University, and in a previous life managed animators and organized spreadsheets at some of the best animation studios in the world, including Nickelodeon, Disney, DreamWorks Animations, and Sony Picture Imageworks. You can find her name in the credits of The Croods, Hotel Transylvania, The Princess and the Frog, and Tangled. In addition to Drawn That Way, she is the author of the YA fairy tales Stray and Burn, and the adult novel, Funny You Should Ask. She lives in Los Angeles with her family.

Arielle Jovellanos is a Filipina American freelance illustrator, writer, and comic artist based in New York. She specializes in narrative illustrations with an eye for character interaction and cute clothing. Her work includes the graphic novels Black Star by Eric Anthony Flover and Evil Thing: A Villains Graphic Novel and has also been featured in magazines, comics, books, and branded social media campaigns. Arielle is currently adjunct faculty in the illustration department at the Fashion Institute of Technology. Outside of work, she loves sitcoms, showtunes, superheroes, succulents, and storytelling structure (also alliteration, apparently). Find out more at Arielle-Jovellanos.com.