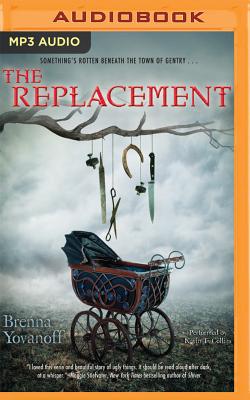 “The only thing teenage Mackie knows for sure is that he's not like everyone else. And it's getting worse. He's becoming allergic to so many things he can hardly leave his room. It doesn't even seem human. Perhaps because it isn't, or rather, he isn't. Dropped into a human baby's crib 16 years ago as a 'replacement', the past is catching up to Mackie and he isn't sure whether to run away or confront the evil that has controlled him and his hometown for centuries. Scary fun!”
— Anne Holman, The King's English, Salt Lake City, UT

Mackie is not one of us. Though he lives in the small town of Gentry, he comes from a world of tunnels and black murky water, a world of living dead girls ruled by a little tattooed princess.

He is a Replacement--left in the crib of a human baby sixteen years ago. Now, because of fatal allergies to iron, blood, and consecrated ground, Mackie is slowly dying in the human world.

Mackie would give anything to live among us. He just wants to play bass guitar and find out more about an oddly intriguing girl named Tate.

But when Tate's baby sister goes missing, Mackie is drawn irrevocably into the underworld of Gentry, known as Mayhem.

He must face the dark creatures of the slag heaps and find his rightful place, in our world, or theirs.