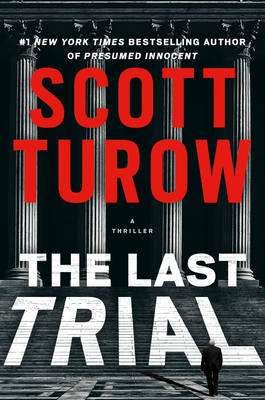 Two formidable men collide in this "first-class legal thriller" and New York Times bestseller about a celebrated criminal defense lawyer and the prosecution of his lifelong friend -- a doctor accused of murder (David Baldacci).
At eighty-five years old, Alejandro "Sandy" Stern, a brilliant defense lawyer with his health failing but spirit intact, is on the brink of retirement. But when his old friend Dr. Kiril Pafko, a former Nobel Prize winner in Medicine, is faced with charges of insider trading, fraud, and murder, his entire life's work is put in jeopardy, and Stern decides to take on one last trial.
In a case that will be the defining coda to both men's accomplished lives, Stern probes beneath the surface of his friend's dazzling veneer as a distinguished cancer researcher. As the trial progresses, he will question everything he thought he knew about his friend. Despite Pafko's many failings, is he innocent of the terrible charges laid against him? How far will Stern go to save his friend, and -- no matter the trial's outcome -- will he ever know the truth?
Stern's duty to defend his client and his belief in the power of the judicial system both face a final, terrible test in the courtroom, where the evidence and reality are sometimes worlds apart.
Full of the deep insights into the spaces where the fragility of human nature and the justice system collide, Scott Turow's The Last Trial is a masterful legal thriller that unfolds in page-turning suspense -- and questions how we measure a life.

Scott Turow is the author of many bestselling works of fiction, including Testimony, Identical, Innocent, Presumed Innocent, and The Burden of Proof, and two nonfiction books, including One L, about his experience as a law student. His books have been translated into more than forty languages, sold more than thirty million copies worldwide, and have been adapted into movies and television projects. He has frequently contributed essays and op-ed pieces to publications such as the New York Times, Washington Post, Vanity Fair, the New Yorker, and the Atlantic.

"In this meticulously devised courtroom drama, rich with character detail, Turow again demonstrates what he does best: roll out a complex, keenly observed legal case yet save a boatload of surprises for its ending. And make it personal."—New York Times

"Since Presumed Innocent rocked the publishing world, Scott Turow has cemented his status as a writer with few peers in any genre. Now the master is back with a brilliant courtroom chess match that shows us the human quotient in all its rot and virtue. The Last Trial is a first class legal thriller."—David Baldacci, #1 New York Times bestselling author

"One of the major writers
in America."—NPR

"No one tells this sort of story better than Turow. No one has illuminated the human side of the legal profession with such precision and care. The Last Trial is Scott Turow at his best and most ambitious. He has elevated the genre once again."—Washington Post

"Turow writes like a dream [with] revelations and surprises aplenty . . . Though the trial is center stage, it will be Turow's characters who linger in the mind."—Chicago Tribune

"This is thriller writing of the highest order, at once a brilliant character study and superb exploration of the nature, and relative merits, of the truth."—Providence Journal

"Turow has established the gold standard for legal thrillers for decades, and he delivers another bar-raising example of his talent here, with his signature absorbing legal details, cerebral suspense, and fascinatingly flawed characters all on full view."—Booklist, Starred Review

"This legal mystery tells a fascinating story smoothly and compellingly. Turow develops his characters in real, multi­dimensional ways . . . All in all, a truly terrific read."—Forbes

"A fascinating portrait of friendship tested and revealed, as well as a pitch-perfect courtroom thriller."—CrimeReads

"A timely, whip-smart legal thriller about aging, justice, and what we owe the people we love."—AARP

"Scott Turow [is] arguably the godfather of the modern legal thriller . . . Seasoned pro that he is, Turow ratchet[s] up the tension while considering the implications of deceit, finance, Big Pharma and the physical and mental trials of aging."—Seattle Times

"It is fitting that Sandy Stern, who has appeared in multiple Turow novels, ends his career in this extraordinary literary accomplishment. The novel's ruminations on retirement and the practice of law are thoughtful and heartfelt."—Illinois Times

"Turow has a gift for transforming issues of the day into riveting, suspenseful courtroom thrillers . . . Tension mounts in Turow's courtroom as deft legal maneuvering propels the suspense."—National Book Review

"[Scott Turow] has not lost his edge."—Financial Times

"The Last Trial is another excellent courtroom drama by a proven master of the legal thriller . . . Turow is smart enough to stick to what he does best -- a solid legal thriller with a page-turning story, an excellent main character, and fresh insight into subject matter that extends naturally from the trial at the center of the novel."—New York Journal of Books

"The Last Trial deserves a place atop the legal-thriller genre . . . no one connects parallels quite like Turow, and he injects them into his books with high frequency . . . sheer bliss for the reader with the horsepower to recognize and savor a piece of classic fiction."—Washington Independent Review of Books

"Twisty . . . a page-turner that makes a trial centered on fraud and insider trading fascinating. Turow remains in a class of his own in conveying the subtleties of criminal defense work while also entertaining his readers."—Publishers Weekly

"Highly suspenseful . . . Everyone wants to see Stern wrap up his career with a win -- but Turow has surprises and roadblocks up his literary sleeve that will make this very difficult. As a character, Stern really does go out with a bang."—Book Reporter

"Amazingly instructive . . . amid all the heavy-duty learning, Turow treats us to one chapter that is as darkly comic as anything he has written. Check it out."—Toronto Star

"Turow is good, like, really good, and his works are quite cerebral for the genre, primarily set in the courtroom."—Winnipeg Free Press

"In Turow's latest work of fiction The Last Trial, there are legal turns aplenty [and] several dollops of suspense . . . memorable, intelligent, and ultimately humane."—Houston Press

"The richness of The Last Trial extends beyond the courtroom scenes which on their own compel attention . . . Turow's prose, smart and straightforward without affectation, achieves elegance in its impassioned commitment to our judicial way of life."—WSHU Public Radio

"Turow has long proven to be one of the top legal thriller novelists in the game."—The Real Book Spy

"Turow takes care to demystify cancer research and the FDA approval process, along with a tutorial on the restrictions imposed on the stock deals of company officers. But beyond medical and financial ethics, Turow takes on complicated relationships."—Mystery Scene magazine

"Turow takes readers into the courtroom with Sandy Stern one last time. Pacing in front of the jury box with him, we experience both celebration and mourning."—The Big Thrill

"The Last Trial weds a page-turner urgency to the authentic trial expertise that served Turow through nine years as an assistant U.S. attorney and another 34 as a pro bono defense lawyer."—Naples Daily News

"The Last Trial will leave you turning page after page in suspense."—Long Island Weekly

"You won't want to put this book down . . . a fascinating legal thriller."—Red Carpet Crash

"[The Last Trial] features great characterization . . . and a knack for explaining while entertaining."—Florida Keys Weekly

"We are glad that The Last Trial is not the last word from one of the great authors of our times, Scott Turow." —CBA Record