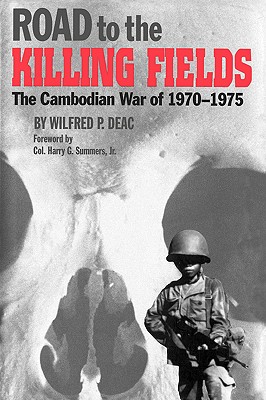 In 1970, the small nation of Cambodia was sucked into the vortex of Cold War geopolitics, a war whose denouement led to one of the worst bloodbaths in history. Road to the Killing Fields is the first book to deal exclusively with the military aspects of how that tragedy developed.

Because U.S. involvement in that part of Southeast Asia was largely clandestine, Americans have had little exposure to the events that led to the horrific citizen massacres known as the "killing fields." Author Wilfred P. Deac offers background information in his introductory chapters, describing Cambodia and its people, the decades of French colonialism, and the early years of independence under Prince Sihanouk.

Deac describes how Sihanouk walked a tightrope between the right and the left, the East and the West. During the 1960s, plotting from both left and right assured that the prince would be overthrown, ultimately by the right wing. The coup-makers’ belligerence toward the Vietnamese Communists and the reaction of North Vietnam, whose goal was control of all Indochina, led to the outbreak of open warfare. The Cambodian government, supported by the United States and South Vietnam, was pitted against the Communists, who consisted of Khmer Rouge, North Vietnamese, and Viet Cong aided by the Soviet Union and China.

In the balance of the book, Deac describes the events of the five years of warfare: the early American and South Vietnamese incursions and the first Cambodian government offensives; the government’s lost battle for control of the countryside; the corruption, popular unrest, and political in-fighting that weakened the government; the ascendancy of the Khmer Rouge over their North Vietnamese allies; the nonstop, 189-day American bombing offensive in 1973; the siege, strangulation, and fall of Phnom Penh; and the introduction of the horror of the killing fields. A brief afterword looks at Cambodian postwar policies, the Khmer Rouge–Vietnamese War of 1978–79, and today’s prostrate Cambodia, an inevitable result of war.

WILFRED P. DEAC was a U.S. government civilian officer posted in the United States, Europe, and Asia between 1960 and 1989. In 1971 he was attached to the U.S. Embassy in Cambodia. He currently works as a freelance writer in Washington, D.C.