Dungeon, Fire and Sword: The Knights Templar in the Crusades (Paperback) 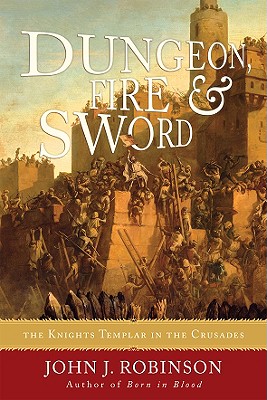 Over the past thousand years, the bloodiest game of the king-of-the-hill has been for supremacy on the Temple Mount in Jerusalem, the site of the ancient Temple of Solomon. This book recounts the stirring saga of the Knights Templar, the Christian warrior-monks who occupied the sacred Mount in the aftermath of the butchery of the First Crusade. Recruited to a life of poverty, chastity and obedience intended to lead only to martyrdom on the battlefield, they were totally dedicated to the pious paradox that the wholesale slaughter of non-believers would earn the eternal gratitude of the Prince of Peace. The Templars amassed great wealth, which they used to finance their two hundred years of war against Muslims on the desert, in the mountains, and up the broad sweep of the Nile valley. The Templars' reward for those two centuries of military martyrdom was to be arrested by pope and king, tortured by the Inquisition, and finally decreed out of existence. But their legend and legacy just would not die. In telling the incredible story of the Knights Templar, the author's clear explanation of the cultural and religious differences among the Templars' enemies and friends in the Middle East gives fresh understanding of the people who populate this restless region. Here are the Sunnies and the Shiites, the Kurds and Armenians, the Arabs and Turks, who figure so prominently in today's headlines. The similarity of their antagonisms today and those of eight hundred years ago are often so striking as to be eerie. Dungeon, Fire & Sword is a brilliant work of narrative history that can be read as an adventure story, a morality play, or a lesson in the politics of warfare.

John J. Robinson was a business executive and ex-marine as well as the author of several books including the provocative medieval history Born in Blood: The Lost Secrets of Freemasonry.