Reinhold Messner: My Life at the Limit (Legends and Lore) (Paperback) 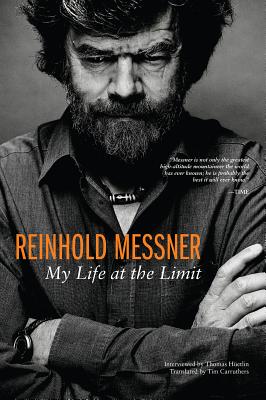 
- Reveals the long view from an icon who, with age, has added wisdom to his list of accomplishments
- Messner climbing firsts: the world's fourteen peaks taller than 8000 meters; Everest solo; Everest without supplemental oxygen Reinhold Messner: My Life at the Limit is a conversation between Messner and interviewer Thomas H etlin, an award-winning German journalist. It reveals a more thoughtful and conversational Messner, covering not only the highlights of Messner's climbing career, but also his treks across Tibet, the Gobi, and Antarctica; his five-year-stint as a member of the European Parliament; his encounter with and study of the yeti; his thoughts on traditional male/female roles; and much more. Readers learn about Messner's childhood, his thoughts about eating ice cream with girls (against), politics (mostly liberal), and his technique for killing chickens (sharp scissors). Messner is known as one of history's greatest Himalayan mountaineers, a man who pushed back the frontiers of the possible for a whole generation of climbers. While the interest in My Life at the Limit is that it exposes much more of the man than his climbing career, that career is still utterly remarkable----and Mountaineers Books is proud to present this book, which is core to our mission, to audiences across North America. This title is part of our LEGENDS AND LORE series. Click here > to learn more.