A History of Air Warfare (Hardcover) 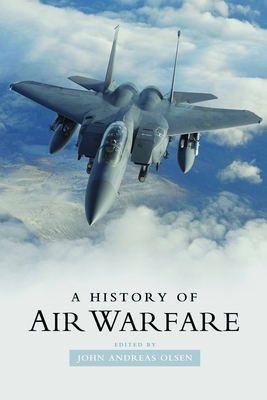 ***Selected for the 2010 Chief of the United States Air Force's Reading List***This one-volume anthology provides a comprehensive analysis of the role that air power has played in military conflicts over the past century. Comprising sixteen essays penned by a global cadre of leading military experts, A History of Air Warfare chronologically examines the utility of air power from the First World War to the second Lebanon war, campaign by campaign. Each essay lays out the objectives, events, and key players of the conflict in question, reviews the role of air power in the strategic and operational contexts, and explores the interplay between the political framework and military operations proper. The concluding section offers wider perspectives by focusing on air and space power in both unconventional and conventional warfare from 1913 to the present. More than a simple homage to air power, A History of Air Warfare exposes air power’s strengths and weaknesses and, where relevant, illuminates the challenges of joint operations and coalition warfare. Because of its critical approach, even treatment, and historical background, the book will appeal to modern warfare scholars, air power specialists, and general readers interested in military history alike.

COL. JOHN ANDREAS OLSEN is currently assigned to the Norwegian Ministry of Defence and is a visiting professor of operational art and tactics at the Swedish National Defence College. His previous publications with Potomac Books include John Warden and the Renaissance of American Air Power, A History of Air Warfare, Global Air Power, and Air Commanders.

“A fine assembly of papers on air power history and development and a ‘bible’ packed with information. This captures the changing history of air warfare and analyzes the role air power has played in military conflicts over the last century. These sixteen essays pack a punch and are a ‘must’ for any serious military history library.”—Midwest Book Review

“The book provides the most comprehensive and best recent overview of the air warfare development, and accordingly, will be considered for the 2011 Chief of the Air Force Reading list.”—Aimpoint

“Everything you need to know about the evolution of modern air warfare is here. I have been studying air warfare for over forty years now, but if I had room for only one historical volume that encapsulated the evolution of western air warfare since 1914, this would be it. It is superbly written. Should be on the syllabus for staff colleges and a must for all serious students of modern warfare.”—RUSI Journal

“A better qualified editor for such a volume could hardly be found. There is no better work on the general history of air warfare than this volume.”—Journal of Military History

"Col John Olsen is one of the dominant voices in airpower history and operations in the world today. His books should be required reading for everyone in uniform."—Phillip S. Meilinger, PhD, Colonel, USAF, Retired, Strategic Studies Quarterly

“A History of Air Warfare is an epic work that captures all the essential elements that have made the airplane a dominant force in warfare. The authors are the most knowledgeable for each period they chronicle. Most of all, the readers will be captivated as they relive the excitement of swirling air battles or the use of modern marvels such as stealth tactics, precision weapons, or air campaign planning. This book should be required reading for all military leaders, but it is also great entertainment for the general reader as it captures the vivid history of our new way of war.”—Gen. Charles A. Horner, USAF (Ret.)