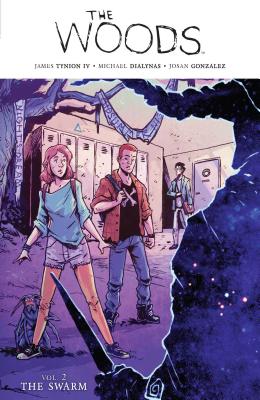 This is book number 2 in the The Woods series.

An entire high school has been transported to an alien world and must now survive together or die individually.

On October 16, 2013, 437 students, 52 teachers, and 24 additional staff from Bay Point Preparatory High School in suburban Milwaukee, WI vanished without a trace. Countless light years away, far outside the bounds of the charted universe, 513 people find themselves in the middle of an ancient, primordial wilderness. Where are they? Why are they there? The answers will prove stranger than anyone could possibly imagine. Catch a glimpse of Bay Point Preparatory High School before the fateful events of October 16, 2013 in this new story arc. On opening night of the school’s rendition of “A Midsummer Night’s Dream,” the lives of the students and faculty crossed paths in an almost premonitory way, seeding the various horrors to come. Collects The Woods #5-8.