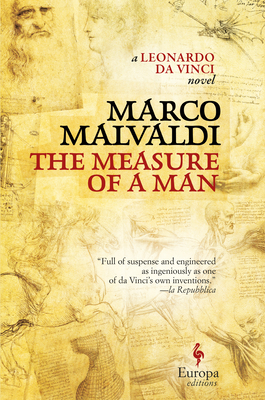 By Marco Malvaldi, Howard Curtis (Translator)
$23.95
On Our Shelves Now - Click for Details

October 1493. Florence is still mourning the death of Lorenzo the Magnificent. Columbus' ships have only recently reached the New World. The modern financial system has just come into being thanks to the adaption of the letter of credit. Meanwhile, Milan is experiencing a renaissance under the leadership of Ludovico il Moro.

Those wandering in the courtyards of Milan's Castle or along the Navigli canals often encounter a strange man in his forties, dressed long pink robes, his expression calm, like someone who is lost in his own thoughts. The man lives above his workshop, with his mother and a mischievous little boy whom he dotes on; he doesn't eat meat, writes from right to left, and struggles to get paid by his employers. His name is Leonardo da Vinci. His fame extends beyond the Alps, to the French court of Charles VIII, whose envoys have been tasked with a secret mission that concerns Leonardo himself. It is rumored that the Italian inventor keeps his most daring designs--including perhaps the project for an invincible mechanical knight--in a notebook hidden under his robes, close to the heart.

When a man is found dead in the Castle's courtyard, il Moro turns to Da Vinci for help. Though the corpse shows no signs of violence, the death is highly suspicious: rumors of a plague or superstitious explanations need to be disproven quickly. Leonardo is in no position to refuse his master's request to investigate.

Five hundred years after Leonardo's death, Marco Malvaldi combines literature, science, history, and crime to bring back to life one of the greatest figures of the Renaissance.