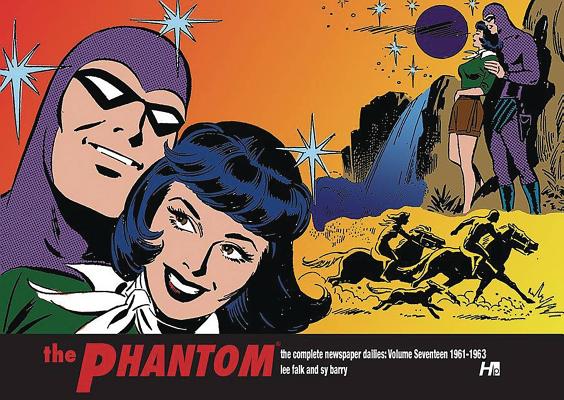 Referred to by comic strip historian Maurice Horn as the "granddaddy of all costumed superheroes," The Phantom was created in 1936 by Lee Falk with artwork by Ray Moore. The strip hit the funny pages of newspapers well before the Dark Knight or Superman made their first appearances and has been acknowledged as an influence on every "masked man of mystery" since. The Phantom set the standard for action, adventure, intrigue, and romance in adventure comic strips and comic books - it has frequently been copied but never equaled.
This exciting 17th volume begins the SY BARRY YEARS We finish up Wilson McCoys long run of the series with The Iron Dragon, and The Werewolf, and then jump right into Sy Barry's years of the strip. Reprinted in all its black and white glory, journey with Hermes Press as we bring you three complete continuities drawn by Sy himself: "The Slave Market of Mucar," "The Epidemic," and "The Wharf Rats." Strips from this issue are taken directly from King Feature's proofs. Included in the volume is a comprehensive essay and documentary materials.