A Knife in the Fog (Paperback) 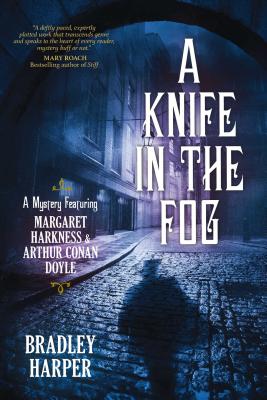 This debut novel is the first in a series starring the real-life author and suffragette Margaret Harkness, continued in Queen’s Gambit.

“Ardent feminism and cerebral detection face down the Ripper in the fog-shrouded streets of London: a feast for lovers of historical crime!”

—Laurie R. King, author of The Beekeeper’s Apprentice and Island of the Mad

“Arthur Conan Doyle chasing after Jack the Ripper? Bradley Harper makes this irresistible pairing come alive. Ingenious in its premise and plotting, impressive in its unique forensic precision, infectious in its overflowing passion for the subject matter, A Knife in the Fog will be relished by fans of historical fiction, Sherlock Holmes, and Ripper literature. A debut novel worth falling for.”

Physician Arthur Conan Doyle takes a break from his practice to assist London police in tracking down Jack the Ripper in this debut novel and series starter. September 1888. A twenty-nine-year-old Arthur Conan Doyle practices medicine by day and writes at night. His first Sherlock Holmes story, A Study in Scarlet, although gaining critical and popular success, has only netted him twenty-five pounds. Embittered by the experience, he vows never to write another "crime story." Then a messenger arrives with a mysterious summons from former Prime Minister William Gladstone, asking him to come to London immediately. Once there, he is offered one month's employment to assist the Metropolitan Police as a "consultant" in their hunt for the serial killer soon to be known as Jack the Ripper. Doyle agrees on the stipulation his old professor of surgery, Professor Joseph Bell--Doyle's inspiration for Sherlock Holmes--agrees to work with him. The two are joined by Miss Margaret Harkness, an author residing in the East End who knows how to use a Derringer and serves as their guide and companion. Pursuing leads through the dank alleys and courtyards of Whitechapel, they come upon the body of a savagely murdered fifth victim. Soon it becomes clear that the hunters have become the hunted when a knife-wielding figure approaches.

Bradley Harper is a retired US Army Colonel and pathologist who has performed over two-hundred autopsies and some twenty forensic investigations. A life-long fan of Sherlock Holmes, he did intensive research for this debut novel, A Knife in the Fog, including a trip to London's East End with noted Jack the Ripper historian Richard Jones. Harper’s first novel was published in October 2018 and was a finalist for a 2019 Edgar Award by the Mystery Writers of America for Best First Novel by an American Author.

“Arthur Conan Doyle chasing after Jack the Ripper? Bradley Harper makes this irresistible pairing come alive. Ingenious in its premise and plotting, impressive in its unique forensic precision, infectious in its overflowing passion for the subject matter, A Knife in the Fog will be relished by fans of historical fiction, Sherlock Holmes, and Ripper literature. A debut novel worth falling for.”

“[A] richly detailed, intense debut…. The intricately plotted story is worthy of Conan Doyle himself, with language and characters reminiscent of the Holmes canon and foreshadowing of the author's future work. This compelling debut will have wide appeal, attracting readers of Jack the Ripper fiction, Sherlock Homes fans, and anyone who appreciates real-life people as sleuths.”

—Library Journal DEBUT OF THE MONTH, STARRED REVIEW
“Like all great mystery novels, Bradley Harper’s take on the Ripper case delivers suspense, action, and an utterly unexpected reveal. But Harper’s work stands apart, both for its nuanced, sympathetic portraits of the victims and for its informed medical and forensic detail—the latter gleaned from the author’s career as a pathologist. Harper has crafted a deftly paced, expertly plotted work that transcends genre and speaks to the heart of every reader, mystery buff or not.”

“Entertaining and meticulously researched, A Knife in the Fog brings to vibrant life a gathering of historical figures—Arthur Conan Doyle, Joseph Bell, and Jack the Ripper—that will fascinate readers of both historical fiction and Sherlock Holmes. The dark streets of London’s East End have never felt more real or more dangerous.”

—Gordon McAlpine, author of Holmes Entangled and Woman with a Blue Pencil

“Ardent feminism and cerebral detection face down the Ripper in the fog-shrouded streets of London: a feast for lovers of historical crime!”

—Laurie R. King, author of The Beekeeper’s Apprentice and Island of the Mad

“Yards above the usual pastiche, told in flowing language that could almost be sung…. Holmes' fans will appreciate the glimpses, amid the action and the examination of social mores, of the elements that formed their hero.”

"A superbly imagined story of how the creator of Sherlock Holmes solves the notorious Jack the Ripper murders. Not only does Harper skillfully immerse the reader in the squalid conditions of the London slums of the 1880s, he does so convincingly and engagingly in the authentic voice of Sir Arthur Conan Doyle. In addition, Harper introduces us to the man who actually inspired the creation of the Holmes character beloved by millions, Doyle’s mentor, Dr. Joseph Bell. But the real treat is the touching relationship that develops between Doyle and Margaret Harkness, a writer and feminist who rocks Doyle’s chauvinistic world. Oh, and Mark Twain makes a cameo appearance, too! I love this story!”

—John DeDakis, author of Bullet in the Chamber, writing coach, and former senior copy editor for CNN’s “The Situation Room with Wolf Blitzer”

“Arthur Conan Doyle is on the case of the infamous Whitechapel murders of 1888, and Bradley Harper shows what fans have long suspected: that Doyle would have been as brilliant a detective as Sherlock Holmes, his greatest creation. What a ripping good yarn!”

—Stefan Dziemianowicz, editor of The Rivals of Sherlock Holmes