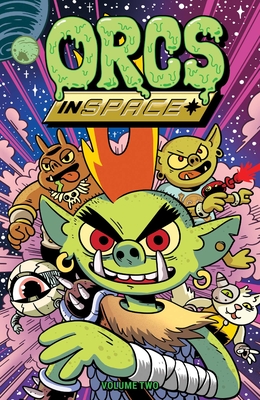 From Justin Roiland, co-creator of Rick and Morty, comes Orcs in Space, a wildly funny and absurd fantasy adventure set in deep space!

Mayhem ensues! Volume 2 of Justin Roiland’s hilarious series Orcs in Space finds Gor, Kravis, and Mongtar making new allies and enemies across the greater Galactigon. With the help of an increasingly sapient D.O.N.A., the orcs face off with an eccentric scrapper bot, a cantankerous cat mechanic, and incur the wrath of a biker gang called the Fuzzballs to discover the truth about D.O.N.A.’s mysterious creator. Will they survive the stand-off with evil scientist Dr. Smedley before Starbleep, the Space Rats, and the rest of the orc-hating universe hunt them down?

Justin Roiland grew up in Manteca, California, where he did the basic stuff children do. Later in life, he traveled to Los Angeles. Once settled in, he created several popular online shorts for Channel 101. Some notable examples of his work (both animated and live action) include House of Cosbys and Two Girls One Cup: The Show.

Justin is afraid of his mortality and hopes the things he creates will make lots of people happy. Then maybe when modern civilization collapses into chaos, people will remember him and they’ll help him survive the bloodshed and violence. Global economic collapse is looming. It’s going to be horrible, and honestly, a swift death might be preferable than living in the hell that awaits mankind. Justin also really hates writing about himself in the third person. I hate this. That’s right. It’s me. I’ve been writing this whole thing. Hi. The cat’s out of the bag. It’s just you and me now. There never was a third person. If you want to know anything about me, just ask. Sorry this wasn’t more informative.

Michael Tanner was born in Great Falls, Montana—a thriving metropolis that is actually smaller than the neighborhood of Los Angeles that he currently resides in. He has a BA in Theater and Television Production from the Evergreen State College, which is also where he met Greg Smith. Michael developed a love for comics at a very early age and credits the medium with expanding his vocabulary and imagination. His first published comic work was in the Oni Press anthology Jam! Tales from the World of Roller Derby. He feels incredibly lucky to have been given the opportunity to work in a field that he loves.

Born in the sleepy suburban town of Modesto, California, Abed Gheith grew up surrounded by He-Man toys, Jim Henson properties, and Superman comics. At a young age, he was always using his imagination to play outside by his lonesome. While other kids were getting broken legs and playing sports, he was coming up with ideas and stories and pretending he was an action movie star. Fast-forward to adulthood, Abed moved to Los Angeles at 23 with his friends Justin Roiland and Sevan Najarian. Together, they created the cult Internet sensation House of Cosbys for Channel101.com. This led to writing two episodes of Rick and Morty with his brother, Rashad. Nowadays, Abed works as a story consultant on shows for Disney and Cartoon Network, and in his spare time writes comic books. He is the inspiration for the character Abed Nadir on the NBC sitcom Community and occasionally co-hosts on a podcast called Gone Riffin' with Rich Fulcher.

R.Y. Gheith is a writer who spends an unhealthy amount of time reading comics, playing fantasy online games, and planning his next step toward musical pop stardom.

FRANÇOIS VIGNEAULT is a freelance illustrator, designer, and cartoonist (not necessarily in that order). In addition to Titan, his work includes 13e Avenue (Éditions de la Pastèque), and his comics and illustrations have been appeared in publications such as Planches, Papercutter, Kayak, and Study Group Magazine. His work has been nominated for numerous awards, including the Joe Shuster Award, Prix des Libraires, and the Prix des Collèges. Born in the United States to immigrant parents, he has lived and worked in Montréal, Québec since 2015.

DJ Chavis is colorist for Orcs in Space and a big ol' nerd with an arguably unfathomable amount of ridiculous interests and hobbies. Warning: Catch him in the right mood and he might talk your ear off about said interests. Follow his work @djcolorscomics.

Dave Pender is one of many Daves in comics who is a comic enthusiast, flatter, and colorist who loves to collaborate. His first major credit with a major publisher is Orcs in Space, published by Oni Press! You can find him on Twitter @waytoomanydaves to congratulate him.