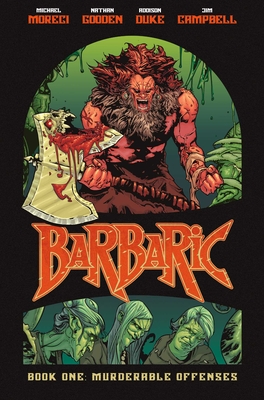 Owen the Barbarian is under a witches' curse to make amends for his murderous past. His bloodthirsty talking Axe is his moral compass. And he'll do whatever it takes to do good, even it if it means cleaving a few skulls. Even if it means helping a witch.

OWEN THE BARBARIAN HAS AN AXE. AND HE'S GONNA DO GOOD WITH IT IF HE HAS TO KILL SOMEONE.

Owen the Barbarian has been cursed to do good with what remains of his life. His bloodthirsty weapon, Axe, has become his moral compass with a drinking problem. Together they wander the realm, foredoomed to help any who seek assistance. But there is one thing Owen hates more than a life with rules: Witches.
Welcome to the skull-cracking, blood-splattering, mayhem-loving comic brave enough to ask: How can a man sworn to do good do so much violence? Hah! F***ing with you. It’s just…BARBARIC.

An award-winning illustrator and sequential artist, Nathan C. Gooden is Art Director at Vault Comics. Nathan studied animation at the Pratt Institute in Brooklyn, and worked in film production, before co-founding Vault Comics. Nathan’s previous works include Brandon Sanderson’s Dark One (Vault), Barbaric (Vault), Zojaqan (Vault), and  Killbox (from American Gothic Press). He lives in Southern California, where he plays a lot of basketball and hikes constantly with his wife.

"Man o man! It is a glorious time to be reading comics. Barbaric No. 1 delivers on the action, the violence & the funny! The expanded page count also makes for a meaty read. Bravo!"
— George G. Gustines

“Barbaric is a riotous, hearty stew of wit and gore… Long may Owen and Axe trod their bloodstained path, bringing us along for the adventure.”
— Jonathan French

"This book is seriously great. Do not miss out!"
— Darick Robertson

"This comic is absolutely badass. A sentient wise-cracking morally correct axe that punishes the wicked. And its human. SO. DAMNED. GOOD."
— John Hornor Jacobs

Named one of "The Best Comic Books and Graphic Novels of 2021!"

"It's a funny, gory, weird comic with stunning art in muted colors."
— THRILLIST