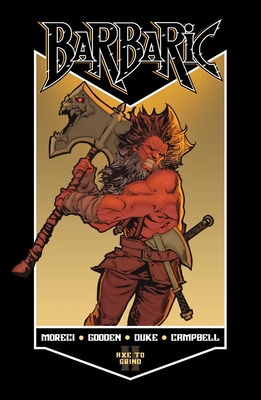 This is book number 2 in the Barbaric series.

As one of Entertainment Weekly’s “10 Best Comics of 2021,” Barbaric – featuring Owen the Barbarian and his bloodthirsty companion Axe – returns in a whirlwind of blood, humor, and mayhem  with an evil demigod, vampires, and rampaging monsters!

Hailed as one of the best comics of 2021 by Entertainment Weekly, Thrillist, Screen Rant, and more, bestselling BARBARIC returns with its second explosive volume!

When a foe from Owen's past returns, he embarks on a bloody mission to succeed where he once failed and kill a malevolent demigod. Which suits Axe just fine, considering he hasn't gotten drunk on god blood yet! Meanwhile, Owen's former barbarian comrade, now a timid vampire, gets cold feet about a life of violence. But in the world of BARBARIC, where orcs, giant spiders, and devil bats roam the land, and doing good is full of gore, is there any other way?

For fans of Conan the Barbarian, Red Sonja, The Witcher, and Dungeons and Dragons!

‘One of the “10 Best Comics of 2021…” Barbaric took only three issues to establish itself as a first-rate comic.’   - Entertainment Weekly

‘One of the “Best Comics of 2021…” It's a funny, gory, weird comic with stunning art in muted colors.’ – Thrillist

An award-winning illustrator and sequential artist, Nathan C. Gooden is Art Director at Vault Comics. Nathan studied animation at the Pratt Institute in Brooklyn, and worked in film production, before co-founding Vault Comics. Nathan’s previous works include Brandon Sanderson’s Dark One (Vault), Barbaric (Vault), Zojaqan (Vault), and  Killbox (from American Gothic Press). He lives in Southern California, where he plays a lot of basketball and hikes constantly with his wife.

Artist / writer Richard Pace has applied his talents to numerous industries including games and television, but comics remains his greatest love. Hailing from Canada, Richard has contributed to BATMAN: THE DOOM THAT CAME TO GOTHAM (DC), PITT (Image), NEW WARRIORS (Marvel), AND IMAGINARY FIENDS (Vertigo).  Currently, he is working on BARBARIC for Vault Comics.

Addison Duke is an illustrator and a comics colorist based in Chicago, IL

After graduating with a BFA in illustration from Academy of Art University, Addison began his professional career working as a Production Artist at Image Comics. Today, he continues to cultivate his professional freelance comic coloring, illustration, and fine art working both with digital and traditional mediums.

Jim Campbell is a twice-Eisner-nominated comic-book letterer, one-time writer (perhaps again in the future!) and occasional artist (although his enthusiasm rather outstrips his actual ability). He knows more about print production than mortal man was meant to know and has also scanned more images than you've had hot dinners. Unless you're ninety years old.