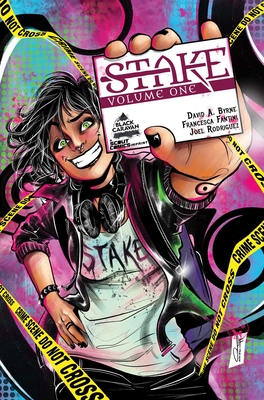 Stake is a modern-day vampire tale that follows the exploits of a teenage vampire hunter who missed growing up when vampires stole her formative years. Now, with the help of her ancient vampire mentor, she hunts those same vampires while sharing her life on social media.

Stake is a coming-of-age story featuring LGBTQ+ characters about a teenager who missed growing up when her new enemies stole her childhood.

When vampires announced their presence to the world by live streaming the murder of her friend Brock, Angel’s life changed forever. Three years later, she goes by the Internet moniker STAKE while she documents her quest to track down the vampires who killed one friend and sent another into a catatonic state. With the help of herancient vampire mentor Jessamy, Angel does it LIVE and unfiltered.

David A. Byrne is the Co-Publisher at Scout Comics and Entertainment and Co-CEO/owner of Brink of Reality Productions. David has an education in film and business and experience as an editor, writer, and retailer. He has spent the better part of two decades in sales and owned and operated independent publisher W.i.N. Pictures, producing the hit comic Stake and such well received titles as Color Me Yellow, Daisy Gets a Brother, Shady Place, and The Couch.

Francesca Fantini is an Italian Comics Artist, Illustrator and Painter. She was born in SassoCorvaro (PU), Italy. She began her career as painter and animator. She has done work for publishers like Scout Comics, Aftershock, and Top Cow.