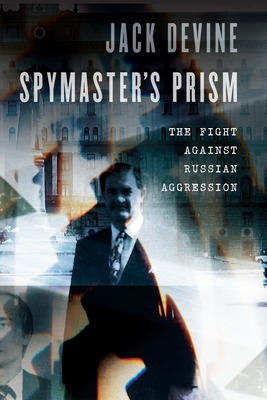 In Spymaster’s Prism the legendary former spymaster Jack Devine details the unending struggle with Russia and its intelligence agencies as it works against our national security. Devine tells this story through the unique perspective of a seasoned CIA professional who served more than three decades, some at the highest levels of the agency. He uses his gimlet-eyed view to walk us through the fascinating spy cases and covert action activities of Russia, not only through the Cold War past but up to and including its interference in the Trump era. Devine also looks over the horizon to see what lies ahead in this struggle and provides prescriptions for the future.

Based on personal experience and exhaustive research, Devine builds a vivid and complex mosaic that illustrates how Russia’s intelligence activities have continued uninterrupted throughout modern history, using fundamentally identical policies and techniques to undermine our democracy. He shows in stark terms how intelligence has been modernized and weaponized through the power of the cyber world.

Devine presents his analysis using clear-eyed vision and a repertoire of better-than-fiction spy stories, giving us an objective, riveting, and candid take on U.S.-Russia relations. He offers key lessons from our intelligence successes and failures over the past seventy-five years that will help us determine how to address our current strategic shortfall, emerge ahead of the Russians, and be prepared for what’s to come from any adversary.

Jack Devine is the president of the Arkin Group, an international risk consulting and intelligence firm. He formerly served as acting director and associate director of operation at the CIA and was in charge of the CIA’s largest and most successful covert action operation which drove the Russians out of Afghanistan. He is the author of Good Hunting: An American Spymaster’s Story.

“Devine applies the lessons of the Cold War to today’s great power struggles as only an insider, spymaster, practitioner could do. Policymakers should act on Devine’s message: The threat is clear, the challenge unrelenting, and the resolve to counter it is paramount.”—Jami Miscik, vice chairman of Kissinger Associates

“Just in time, a splendid intelligence perspective on thug Putin’s determination to get even with us for the Russian loss of the Cold War. . . . The spy history included here is necessary to illustrate that Russian leadership still employs nasty means, from murder to manipulation, to undermine democracy. Only the naïve and inept will fail to heed this message.”—Tom Twetten, former CIA deputy director of operations and chief of the Near East division

“Spymaster’s Prism is a must-read, and the title says it all. The Cold War is not over. The actors may have changed, but the goal remains the same. Jack Devine is a real spymaster, beginning his career as a young CIA operations officer who rose to the highest ranks of the CIA. This book belongs on everyone’s shelf.”—Sandra Grimes, CIA Russian operations specialist and coauthor of Circle of Treason: CIA Traitor Aldrich Ames and the Men He Betrayed

“Jack Devine’s comprehensive history of Russian intelligence efforts against the United States and the West could not be more timely. As amply noted in the book, election meddling, disinformation, and assassination attempts are all modern descendants of a long Russian tradition of espionage and subversion that has been renewed with a vengeance today. Devine’s highly readable style and insider experience in intelligence make this must-read study a persuasive warning to implement the measures he suggests to thwart this threat to our national security.”—Michael Sulick, former director of the U.S. National Clandestine Service

“Told with the immediacy of an eyewitness, Devine is a keen observer of the events and personalities that have shaped U.S. intelligence—from the treachery of spies such as Aldrich Ames and Robert Hanssen to the CIA’s Cold War covert operations in Afghanistan. It is a remarkable volume, told by one of America’s great spymasters, that will appeal to both the intelligence professional and the armchair operative alike.”—Rollie Burans, president of the Foreign Policy Research Institute and former CIA senior executive official

“Devine’s extraordinary career rising to master spy gives the reader multiple glimpses across geographic boundaries into intelligence operations from the optic of a practitioner. From the armchair student of foreign policy to the professional spy wannabe, Devine’s narrative of Russia’s obsession with the West and the United States should be mandatory reading.”—David R. Shedd, thirty-three-year CIA career case officer and former acting director of the Defense Intelligence Agency