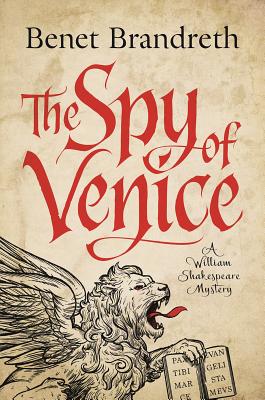 This is book number 1 in the William Shakespeare Mysteries series.

Shakespeare in Love meets C. J. Sansom in a historical thriller with a swashbuckling twist—and a hero as you’ve never seen him before.

When he is caught by his wife in one ill-advised seduction too many, young William Shakespeare flees Stratford to seek his fortune. Cast adrift in London, Will falls in with a band of players, but greater men have their eye on this talented young wordsmith. England’s very survival hangs in the balance and Will finds himself dispatched to Venice on a crucial assignment.

Dazzled by the city’s masques and its beauties, he little realizes the peril in which he finds himself. Catholic assassins would stop at nothing to end his mission on the point of their sharpened knives—and lurking in the shadows is a killer as clever as he is cruel.

Suspenseful, seductive, and as sharp as an assassin’s blade, The Spy of Venice introduces a major new literary talent to the genre—thrilling if you’ve never read a word of Shakespeare and sublime if you have.

Benet Brandreth, an expert on Shakespeare’s language and times, is the rhetoric coach to the Royal Shakespeare Company. The Spy of Venice was his debut novel. He lives in London.

This fast-paced and entertaining novel imagines a young Will Shakespeare as an (unwilling) spy for Her Majesty’s government in Venice in 1585. Successful here on all fronts: dialogue, plot, and characters.

Shakespeare! The lunatic, the lover, the poet. The spy. Royal Shakespeare Company rhetoric coach Brandreth brings considerable expertise to his subject in a story rich in humor and intrigue. The dialogue and characters borrow heavily and delightfully from the Bard himself. Bravo!

Between his twins’ baptism in 1585 and his appearance on London theatre records in 1592, William Shakespeare’s life is a mystery. Brandreth’s first novel is an entertaining exploration of what Will might have been doing during those oft-debated seven ‘lost years.’ This series opener by the rhetoric coach to the Royal Shakespeare Company is great fun for Shakespeare fans as well as those who enjoy smart language and a grand adventure.

What if William Shakespeare was an intelligence agent before he became a playwright? That’s the clever premise of Brandreth’s impressive first novel. Brandreth plausibly and imaginatively fills a gap in the historical record of the Bard’s life.

Using many historically accurate details of the period’s religious and political turmoil in England and the decadent Venetian Republic, Brandreth has crafted a story filled with humor, sexual innuendo, and sparkling banter among well-developed characters. Good reading for Shakespeare aficionados and neophytes alike. A stunning, provocative debut novel sure to capture the imagination of older teens.

A playful and inventive debut. The dialogue is wonderful, and Will’s banter with his fellow actors sparkles.

Entertaining and ebullient. The author knows his Shakespeare backwards (the Venice setting has been carefully chosen), rejoices in its wordplay, loves his allusions and has a good time with his characters. So did I.

This is a clever book. On the level of storytelling alone, this is a good yarn. I also had the distinct impression that Benet Brandreth had a ball whilst writing it. An excellent read.

Historically accurate, building up a picture of a dirty and violent London, a sumptuously degenerate Venice and a Europe riddled with conflicts of religion, power and commerce. Ultimately The Spy of Venice is an amusing and fast-paced action thriller that will entertain a variety of readers.