The Assassin of Verona: A William Shakespeare Novel (Paperback) 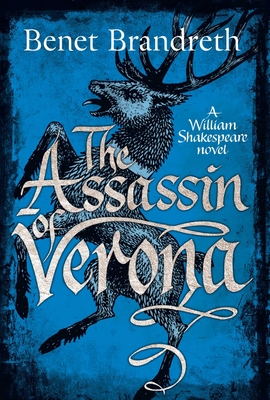 This is book number 2 in the William Shakespeare Mysteries series.

The thrilling new novel of intrigue, conspiracy, and rapier-sharp wit that takes William Shakespeare into the deceit and deception of sixteenth century Verona.

Venice, 1586. William Shakespeare is disguised as a steward to the English Ambassador. He and his actor friends, Oldcastle and Hemming, possess a deadly secret: the names of the Catholic spies in England who seek to destroy Queen Elizabeth. Before long the Pope’s agents begin to close in on them, so fleeing the city is the players’ only option.

In Verona, Aemelia, the daughter of a Duke, is struggling to conceal her passionate affair with her cousin Valentine. But darker times lie ahead with the arrival of the sinister Father Thornhill, who is determined to seek out anyone who doesn’t conform to the Pope’s ruthless agenda . . .

Events will converge in the forests around Verona as a multitude of plots are hatched and discovered, players fall in and out of love, and disguises are adopted and then discarded. Will the brash William Shakespeare and his friends escape with their secrets—and their lives?

Benet Brandreth is an expert on Shakespeare's language and times, the rhetoric coach to the Royal Shakespeare Company, and a writer and performer whose last one-man show was a five-star reviewed sellout at the Edinburgh Fringe and on its London Transfer. The Spy of Venice was his debut novel.

Bodies amass, revenge is taken—and Shakespeare finds even more dramatic inspiration. Fans will enjoy the inclusion of many lines from the Bard's plays and sonnets. Aemelia steals the show.

The glory of the novel is in the gorgeous dialogue, expertly weaving Shakespeare’s lines with period vocabulary and syntax while keeping it completely comprehensible to the modern reader. A wonderful novel: enjoyable characters, exciting, funny, startling and ultimately, thought-provoking. Highly recommended.