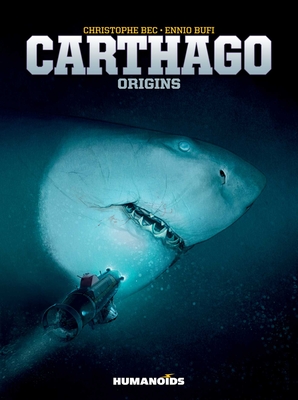 In the insatiable quest for natural resources, humans are searching further and deeper into the earth, threatening to unleash monsters thought to be long gone.

Twelve years have passed since Lou Melville and her mother discovered the ruins of an ancient underwater city with billionaire Feiersinger. Now the heiress to his fortune, Lou is leading a scientific expedition researching the megalodon. It’s clear the young woman has not lost her taste for exploration…but she is still unaware of her origins.

Christophe Bec is a writer and artist. Born in France, he spent the first few months of his life in Morocco due to his parent’s work. Attracted to comics from an early age, he began his career by producing fanzines, one of which earned a Best Fanzine nomination at Angoulême Comics Festival. He joined the Comics School of Angoulême the next year. Known for the art behind “Absolute Zero”, “Sanctum” and “Prometheus”, he is also the author of “Pandemonium”, “Shadows of Salamanca” and “Carthago”. “Sanctum” earned him nominations for Best Comic Album at both the Cognac Detective Film Festival and the Jules Vernes Film Festival. He also won the Uderzo Prize for his series “Lent”.

Born in Italy in 1976, Ennio Bufi graduated in sculpture from the Academy of Fine Arts in Bari. From 2007 to 2010, he worked in animation and participated in several productions as a graphic designer and character designer. After having been noticed for his work as an illustrator, he published for the first time in France with Grand Angle, a book entitled Clandestino written by Marzano. In 2013, he then worked with Geronimo Stilton on a children's series at Glénat. In 2016, he illustrated Vértigo at Lombard and joined Humanoids to take over the Carthago series from Milan Jovanovic.

"The writing is bananas and the art is just plain awesome. This is like Jaws meets Heavy Metal comics."
— Lenny Schwartz

"Both the simple and the complex panels are striking in Carthago, combining brutality with beauty."
— Nathan Wilson

"Put simply, this is the kind of comic to become utterly lost within, and would be worthy of the term ‘unputdownable’ if such a word existed."
— Laura Sneddon