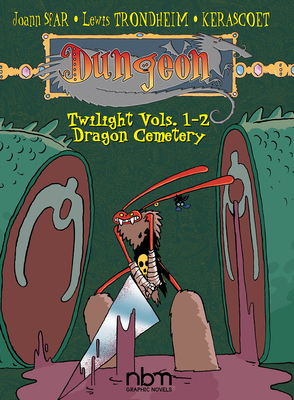 The planet Terra Amata, on which Dungeon resides, has stopped turning. On one side, total darkness and absolute coldness; on the other, a searing desert and eternal day. The survivors live on a thin slice of earth where day and night meet. A territory known as TWILIGHT. Welcome to the third facet of the Dungeon world, its dark downfall. Marvin, now old and blind, sensing his end, goes on a long trek to the legendary cemetery of dragons. And then, saved at the last minute from certain death in a duel by his young warrior admirer Marvin the Red, he simply cannot be let to die like he wishes! Whatever he loses, he regains in different powers. He’s even become invincible. It’s to the point where he’d rather exchange body parts to get back his mortality! But then he is led to a discovery that may make continuing to live actually worth it…

Joann Sfar is an artist, writer, and film director. He is best known for his adaptation of The Little Prince and his original bestselling title The Rabbi's Cat. Lewis Trondheim is one of the leaders of a new generation of comic artists bringing in novel ways of creating comics. One of the founders of the disruptive 'L’Association' publishing cooperative in France, he helped usher in much longer and sophisticated narratives in the graphic novel form. He is an amazing font of original and out of the box ideas that have propelled him to a leading author standing in Europe.

"The humor can be biting and sly. And precisely because it is so light and warmhearted, the moments of melancholy and actual profundity reach into your chest, pull out your heart and keep it hostage." —The New York Times Book Review

"Dungeon comics -- that's a big inspiration for me and the crew who write on the show. Dungeon's a great comic, and I look to it for the sort of casual conversation they have with the big fantasy world that they all live in."—Adventure Time’s Pendleton Ward in an interview on USA Today’s Pop Candy

"A sprawling satirical fantasy about anthropomorphic warriors in a magical, ludicrous kingdom. It's a darkly whimsical epic that’s a mash-up of D&D, Cerebus, Groo and any number of works by headliners Trondheim and Joann Sfar." —Heidi McDonald, The Beat