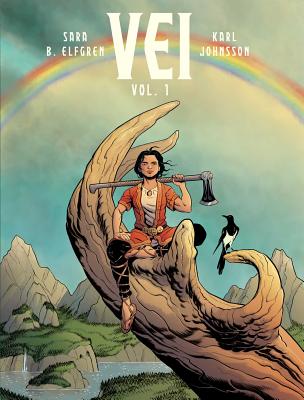 In the midst of a bloody battle between giants, Asgardian gods, and humans, deceit and betrayal run wild. One warrior must fight to discover who she can trust and beat the odds to determine the ultimate fate of her people.

She trained her whole life to become the strongest warrior of Jotunheim, to become the beloved champion of her gods. But when the time came to finally prove her strength, Vei was cast into the sea by the very god she fought for.

Rescued by a Viking ship, Vei returns to Jotunheim, home of the legendary giants. There she finds herself caught in the Meistarileikir, a bloody game between the humans, the giants, and the gods of Asgard that will determine who will have the right to rule the land of Midgard. Having lost the confidence of her own god, Vei must take her place in the Meistarileikir and fight not only for the control of Midgard, but for her very life, in this epic battle against daring warriors, fearsome monsters, and even the gods themselves.

A bestseller in Sweden, Vei weaves together an incredible tale that pits man against God and God against God in an outstanding Hunger Games meets Norse mythology graphic novel.

Sara Bergmark Elfgren is a bestselling Swedish author and screenwriter. Her first novels, The Engelsfors trilogy, was nominated for the August prize and has been translated into over 25 languages. Her other notable work includes a radio mockumentary, Voices of the Dead, which was nominated for the Prix Europa award.

Karl Johnsson is a Swedish illustrator who is passionately inspired by fantasy, ancient mythology, and the works of H.P. Lovecraft. He first debuted as a graphic novel artist in 2010 with his gorgeous book, Mara from Ulthar, and has continued working on comics since. His notable work includes contributions to the popular Swedish Engelforstrilogin series, The Engelsfors trilogy with Sara Bergmark Elfgren, and The World of Fantasy series with short stories based on both Norse and Greek mythology.

"This book is gorgeous! The characters are beautifully designed and rendered, and the colouring is excellent! ... I'm very eager for the next volume!"
— SequentialArt.com

"It is easy to see how VEI sparked a loyal following. Artist-writer Karl Johnsson and co-author Sara Bergmark Elfgren have brought to life something truly fun and original. They have created something very special and, thanks to Insight Comics, we have it all collected in an impressive hardcover edition....This is, no doubt, Sword & Sorcery at its best."
— Comics Grinder

"Even if, like me, you have a lifelong obsession with Norse myths, I promise you you've never seen them like this -- this strange, this vivid, this real. VEI takes the whole Norse cosmos and turns it on its head and brings it back to life in one stunning masterstroke. You cannot miss it."
— Lev Grossman

"A mythic tale that feels both faithful to its sources and enthrallingly original. Wonderful stuff!"
— Mike Carey (Lucifer, The Unwritten)