Ghostbusters 101: Everyone Answers The Call (Paperback) 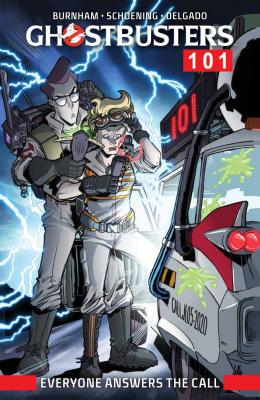 Worlds collide as your favorite Ghostbusters -- from all three movies! -- meet for the first time! It's the biggest crossover since they crossed the streams!


Featuring an all-new introduction by Ghostbusters: Answer the Call director Paul Feig! Before they began investigating the supernatural, most of the original Ghostbusters were teachers... and they've decided it's time they start sharing their knowledge again. But when their first batch of students start poking around the firehouse and accidentally set in motion the merging of two universes (it's easier than you'd think) Venkman, Stantz, Zeddemore, and Spengler will need all the help they can get to put things right! And who do you think will Answer The Call? (If you guessed Holtzmann, Yates, Tolan, and Gilbert... you get a gold star!) It's a brand new inter-dimensional meeting of the minds, starting here!

Erik Burnham is a Minnesotan writer and artist that first broke into comics with a series of humorous short stories in the Shooting Star Comics Anthology. After working on a horror story for Gene Simmons' House of Horror #3 at IDW Publishing, Erik worked on several other projects for IDW, including his current critically acclaimed run on the ongoing GHOSTBUSTERS comic book. He's also been fortunate to work on many other projects, including varied work for Cryptozoic, Insight Editions, Marvel, and Panini.

"Ghostbusters 101 features more of the same greatness that we've all come to expect from a truly great creative team who continue to be at the absolute top of their game." --Big Comic Page