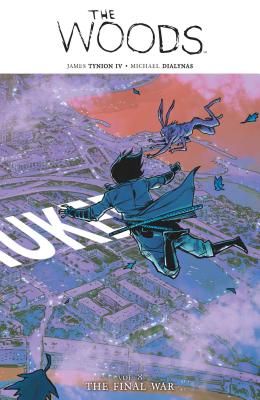 This is book number 8 in the Woods series.

A midwestern high school is transported into the middle of an alien forest. This is the story of what happens next. Every hundred years, the Black City has selected a remote population from Earth and transported them to the woods. These civilizations have not always lived in harmony...but now, they must either fight in unison to turn their weapons against the technology that brought them here in the first place, or meet total elimination in the face of Isaac's unworldly power. Will this unification of factions be enough or are they all doomed? Written by James Tynion IV (Detective Comics, Memetic) and illustrated by Michael Dialynas (Gotham Academy, Teenage Mutant Ninja Turtles), The Woods: The Final War collects the critically acclaimed eighth arc of the best-selling series.

James Tynion IV is the GLAAD award-winning writer behind BOOM! Studios hit original series Wynd, The Woods, and The Backstagers. He's also earned acclaim for his work on Batman, Batman: Detective Comics, Justice League and more of the top-selling series at DC Comics along with his Image Comics series, Department of Truth. Something is Killing the Children debuted as the highest-selling original comic book series launch in BOOM! Studios history and has continued to grow readership and sales well into its second year with issue #11 outselling #1 and issue #16 outselling #11. Something is Killing the Children was nominated for a 2020 Eisner Award in the "Best New Series" category. Tynion's property Department of Truth was announced as optioned by Sister, the production company co-founded by Elisabeth Murdoch, Stacey Snider, and Jane Featherstone, for development in both film and television.