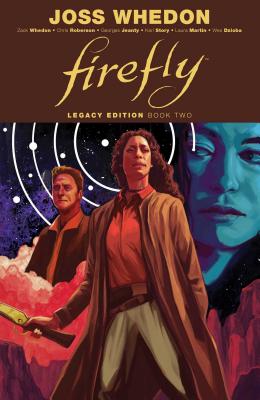 The official follow-up to the critically acclaimed hit film Serenity, that sees the band of space outlaws scattered to the far ends of the universe, on the run from the Alliance

From the heart of the Whedonverse comes the next chapter of Firefly! Picking up where the critically acclaimed film Serenity left off, the ‘Verse is on the brink of war, and Captain Mal and his crew are on the run from the Alliance and an old, unstoppable foe. Babies are born, friends are lost, and there’s a new sheriff in town to lead the Browncoats into battle. With the crew scattered to the far ends of the ‘Verse, it’ll take quite a gamble to pull them back together . . . but when the chips are down, never bet against Captain Malcolm Reynolds!

Whedon co-wrote for the Pixar animated film Toy Story (1995) (for which he was nominated for the Academy Award for Best Original Screenplay), wrote and directed the Firefly film continuation Serenity (2005), co-wrote and directed the Internet miniseries Dr. Horrible's Sing-Along Blog (2008), and co-wrote and produced the horror comedy film The Cabin in the Woods (2012). He wrote and directed the Marvel Cinematic Universe superhero films The Avengers (2012) and its sequel Avengers: Age of Ultron (2015), and also co-wrote the script for the DC Extended Universe superhero film Justice League (2017). He also served as director for Justice League on re-shoots, replacing Zack Snyder (who retained directorial credit).