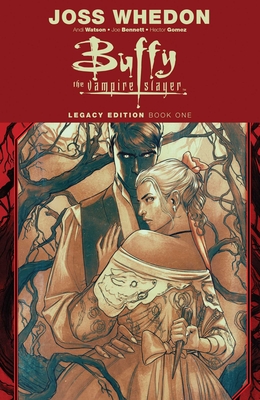 The definitive collection of every Buffy the Vampire Slayer comic, for the first time presented in publication order!

THE OFFICIAL TIE-IN TO JOSS WHEDON’S AWARD-WINNING BUFFY THE VAMPIRE SLAYER TELEVISION SERIES! Set during the third season of the Buffy The Vampire Slayer television series, discover untold stories of the Scooby Gang and their fight against evil in Sunnydale - all while trying not to fail their exams! As Buffy faces the consequences of saving the world - by killing the man she loved - the rest of the team face their own challenges like Angel returning to life without a soul; Willow helping Oz confront the beast inside of him; all while Xander and Cordelia kiss, makeup, kiss, makeup...you probably get the picture.

Collects Buffy The Vampire Slayer #1-10 (Dark Horse Comics), as well as short stories from the era. Legacy Editions collect for the first time every issue of the most popular BOOM! Studios series in chronological order, in a newly designed, value priced format.

Whedon co-wrote for the Pixar animated film Toy Story (1995) (for which he was nominated for the Academy Award for Best Original Screenplay), wrote and directed the Firefly film continuation Serenity (2005), co-wrote and directed the Internet miniseries Dr. Horrible's Sing-Along Blog (2008), and co-wrote and produced the horror comedy film The Cabin in the Woods (2012). He wrote and directed the Marvel Cinematic Universe superhero films The Avengers (2012) and its sequel Avengers: Age of Ultron (2015), and also co-wrote the script for the DC Extended Universe superhero film Justice League (2017). He also served as director for Justice League on re-shoots, replacing Zack Snyder (who retained directorial credit).