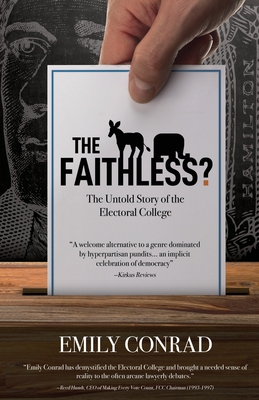 The day after the 2016 general election, Americans were divided: some were celebrating while others were trying to come to terms with Donald Trump's victory over Hillary Clinton. What they did not realize was that the election was far from over.

On December 19, 2016, 538 mostly nameless individuals met at state capitols across the country as members of the Electoral College to officially elect the President. Some electors, both Republican and Democrat, decided to go rogue and not vote for the candidate who won their states' popular vote, bringing problematic questions to the fore-What exactly is the Electoral College? How do states choose their electors? How do electors in turn choose their candidates?

In The Faithless? The Untold Story of the Electoral College, journalist Emily Conrad interviews these so-called "faithless electors" who put their personal safety, as well as their political reputations, at risk to vote according to their consciences rather than toeing party lines. Interweaving tales of the founding and evolution of the Electoral College with these individuals' stories, the book humanizes the country's fraught electoral process.