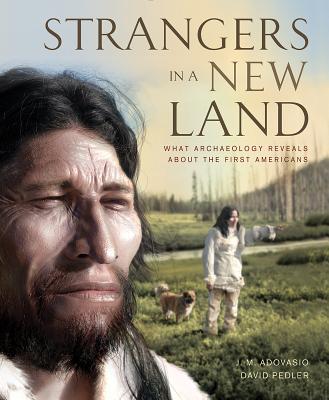 This beautifully illustrated book will be the standard work on the subject for a generation. -- Brian Fagan, University of California, Santa Barbara

An entertaining, authoritative, and up-to-date review of one of the most contentious issues in archaeology today: the early peopling of the Americas. -- Ian Tattersall, American Museum of Natural History

The migration of Homo sapiens into the Americas remains to this day a contentious subject amongst archaeologists. Strangers in a New Land represents a clear, interesting and well documented review of the arguments from all sides about how and when migrants came to the New World, where they came from, and what they were doing. -- Aldona Jonaitis, University of Alaska Museum of the North

In Strangers in a New Land, the authors tell the absorbing story of the first people to explore and colonize the Americas at the end of the last Ice Age with captivating discussions of key concepts and descriptions of the most important First American sites from Alaska to South America. This is a book for anyone interested in learning about the first intrepid people who explored and settled the New World. -- Michael Waters, Center for the Study of the First Americans, Texas A and M University

Strangers in a New Land is a profound and challenging account of an intensely controversial subject, the first human occupation of the New World, written by an acknowledged master. -- Tom Dillehay, Vanderbilt University

Where did Native Americans come from and when did they first arrive? Several lines of evidence, most recently genetic, have firmly established that all Native American populations originated in eastern Siberia.

For many years, the accepted version of New World prehistory held that people arrived in the Western Hemisphere around 13,000 years ago. This consensus, called "Clovis First," has been increasingly challenged by discoveries at numerous archaeological sites throughout North and South America and is now widely considered to be outdated.

The latest findings have convinced most archaeologists that people came to the Western Hemisphere thousands of years prior to Clovis. There is credible evidence of a human presence in the Americas dating to 19,000 years ago and perhaps as early as 38,000 years ago. The prehistory of the very earliest arrivals into the New World is the subject of Strangers in a New Land.

This book documents 35 Clovis and Folsom sites, disputed pre-Clovis sites, legitimate pre-Clovis sites and controversial pre-Clovis sites. This covers an area that stretches from Bluefish Cave, Canada, 70 kilometers north of the Arctic Circle to Monte Verde, Chile, 14,000 kilometers south of Bering Straits. The discovery and history of each site is accompanied by photographs, maps and diagrams that illustrate the excavations and chronicle the evidence of human activity. Strangers in a New Land brings these findings together for the first time in language accessible to the general reader.

An excellent selection for physical and cultural anthropology, archaeology and prehistory collections.