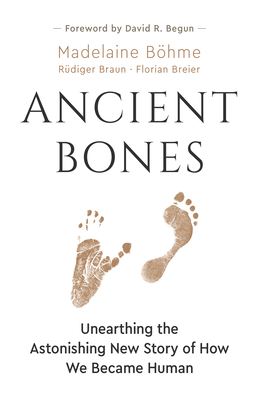 "Part Sherlock Holmes, part Indiana Jones, Ancient Bones is an entertaining and provocative retelling of the human evolutionary story."--Jeremy DeSilva, author of First Steps: How Upright Walking Made Us Human

Fans of Sapiens will love this "fascinating forensic inquiry into human origins" (Kirkus), where a renowned paleontologist takes readers behind the scenes of one of the most groundbreaking investigations into the origins of humankind.

Africa has long been considered the cradle of life--where life and humans evolved--but somewhere west of Munich, Germany, paleoclimatologist and paleontologist Madelaine B hme and her team make a discovery that is beyond anything they ever imagined: the twelve-million-year-old bones of an ancient ape--Danuvius guggenmos--whichmakes headlines around the world and defies prevailing theories of human history and where human life began.

Ancient Bones takes readers behind the scenes of this incredible discovery, and invites readers to explore theories concerning early hominins to prehistoric humans, how climate and the environment were driving forces behind evolution, and how pivotal evolutionary steps--from our ability to communicate using complex speech to walking upright and using our hands to create--were necessary for humans to evolve and live on this planet. Blending science, history and mystery, Ancient Bones explores a fascinating new chapter in the origins of humanity and, above all, brings clarity to what makes humans human.

With prose that read like a thrilling detective story, and pages that feature more than 50 images of fossils, maps, and illustrations and diagrams, this exciting exploration of humanity will prove an indispensable read for those who are endlessly curious about who we are, how we got here, and what comes next.

"Readable and thought-provoking. Madelaine B hme is an iconoclast whose fossil discoveries have challenged long-standing ideas on the origins of the ancestors of apes and humans."--Steve Brusatte, New York Times-bestselling author of The Rise and Fall of the Dinosaurs

"An impressive introduction to the burgeoning recalibration of paleoanthropology."--Kirkus Reviews (starred review)