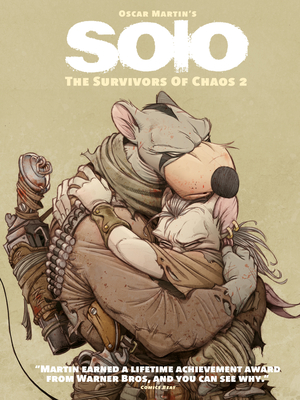 Warner Bros Lifetime Achievement Award winner, Oscar Martin - the renowned writer and artist behind Tom and Jerry comics - brings his own imaginative take on a dystopian world of anthropomorphic animals in this breath-taking sequel to the hit graphic novel, Solo: Survivors of Chaos.

Warner Bros Lifetime Achievement Award winner, Oscar Martin, creates a unique dystopian world of chaos, where every day is a fight to survive.

In a future ravaged by nuclear wars, the Earth has given birth to an array of new mutated species, which have grown and repopulated the land. But this new world is far from peaceful, and life in it is often short and brutal...

To make life easier for his poor family, Solo, a young rat, left his home to become a warrior. Contending with vicious animals and savage hunters, Solo does everything he can to survive. This action-packed, heart-breaking sequel sees Solo's world turned upside-down once again.

Oscar Martin is best known for his work on as an artist and writer of 'Tom and Jerry' comics, have been published in both Europe and the USA. He has also done a variety of comics for the French Disney magazine Le Journal de Mickey. He received a Lifetime Achievement Award from Warner Bros for his work on the 'Tom and Jerry' series in 2002.

“Martin has a gift for scripting action-packed panels, choreographing fight scenes that could be used as storyboards for any Hollywood blockbuster ... 10/10” - The Pullbox

“Turns blades into ballet and combat into a craft. I started reading late one night, intending only to make a start and I read it all the way through in one sitting” - Geek Native

“Creates a kinetic energy that flows throughout the book” - Comicon.com

"[S]ome of the best action I’ve ever seen in comics. You can clearly see the motions of each character and it makes for an engaging read. It makes sense given the writer’s background working with Tom & Jerry." - The 360 Mag