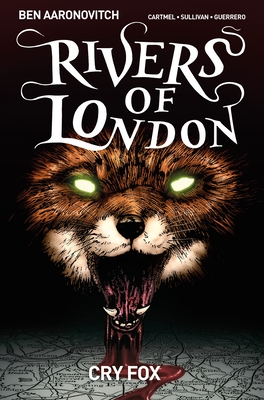 Vengeful Russian mobsters are looking to hire members of London's own more-then-natural underworld to bring bloody retribution down on the witch Varvara. However, the ex-Soviet sorcerer is under the protective wing of London's own wizarding cop, Peter Grant (now a proper detective and everything), and to get the attention of Grant and his colleagues, the daughter of a prominent Russian oligarch is kidnapped by parties unknown but possibly fox-like. What makes it worse is that Peter is going to have to leave his beloved London and *gasp* go out into the countryside! And when there's trees and fields and wildlife involved, things never end well...

Ben Aaronovitch has written for TV, his credits including Doctor Who and Casualty; his Rivers of London novels are international bestsellers and he has finally fulfilled his dream of adding a comic to the series; in this he has been joined by fellow writer and regular Doctor Who contributor Andrew Cartmel. Fellow Doctor Who creators, artist Lee Sullivan, and Luis Guerrero, also join the team. Lee has a long, illustrious career as a comics artist, his work including not just Doctor Who but the likes of Transformers, Robocop and Judge Dredd. Guerrero has worked as a colorist for Vertico and Image comics, and his credits include Doctor Who, The Troop and Mycroft for Titan.