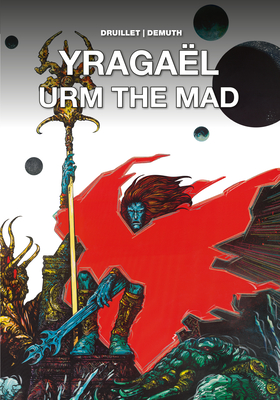 The collected adventures of Yragael, the doomed prince, and his unfortunate progeny, Urm!

Born from chaos, Prince Yragaël, is the last hope for Earth. Gods and demons stroll the land, attempting to enforce their authority on the Last Men once more. He falls prey to the queen of Spharain, and from their union comes a son, Urm - a grotesque fool with the potential to redeem mankind.

Philippe Druillet is a comics artist and writer, known for his innovative approach to visual design. In the US, he's best known for his graphic adaptation of Michael Moorcock's hit fantasy series, Elric, the Return to Melnibone, and his work for Heavy Metal, such as City of Flowers.

Michel Demuth was a French writer, translator, and publisher of science fiction, who has also worked under the pseudonym of Jean-Michel Ferrer. He was also editor-in-chief of Alfred Hitchcock Magazine and Galaxie.

"The stunningly complex visual design of Druillet is dizzying feast of surrealism that continues to astound some 40+ years later." - Comics Beat