Storm Tide: A Novel of the American Revolution (Hardcover) 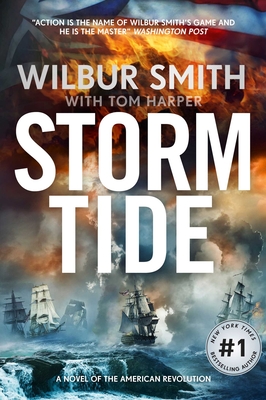 Two brothers divided over the future of a country on the brink of revolution.

Multimillion copy bestselling author Wilbur Smith returns with a brand-new historical epic, set against the backdrop of the American revolution. The Courtney family is torn apart as three generations fight on opposing sides of a terrible war that will change the face of the world forever.

1774. Rob Courtney has spent his whole life in a quiet trading outpost on the east coast of Africa, dreaming of a life of adventure at sea. When his grandfather Jim dies, Rob takes his chance and stows away on a ship as it sails to England, with only the family heirloom, the Neptune Sword, to his name.

Arriving in London, Rob is seduced by the charms of the big city and soon finds himself desperate and penniless. That is until the navy comes calling. Rob is sent across the Atlantic on a ship to join the war against the rebellious American colonists.

But on the other side of the Atlantic, unbeknownst to Rob, his distant cousins Cal and Aidan Courtney are leading a campaign against the British. Their one desire is American independence, and they are determined to drive the British out of America - by whatever means necessary. . .

A powerful new historical thriller by the master of adventure fiction, Wilbur Smith, of families divided and a country on the brink of revolution.

Wilbur Smith was born in Central Africa in 1933. He became a full-time writer in 1964 following the success of When the Lion Feeds, and has since published over fifty global bestsellers, including the Courtney Series, the Ballantyne Series, the Egyptian Series, the Hector Cross Series and many successful standalone novels, all meticulously researched on his numerous expeditions worldwide. An international phenomenon, his readership built up over fifty-five years of writing, establishing him as one of the most successful and impressive brand authors in the world.
The establishment of the Wilbur & Niso Smith Foundation in 2015 cemented Wilbur's passion for empowering writers, promoting literacy and advancing adventure writing as a genre. The foundation's flagship programme is the Wilbur Smith Adventure Writing Prize.

Wilbur Smith passed away peacefully at home in 2021 with his wife, Niso, by his side, leaving behind him a rich treasure-trove of novels and stories that will delight readers for years to come. For all the latest information on Wilbur Smith's writing visit www.wilbursmithbooks.com or facebook.com/WilburSmith