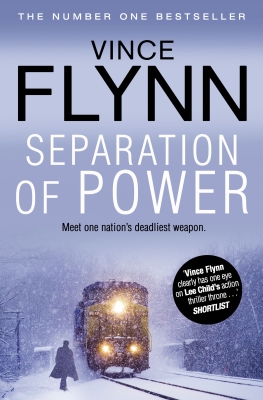 This is book number 3 in the Mitch Rapp series.

Now in a premium edition, the thrilling follow-up to "The Third Option "by #1 "New York Times "bestselling author Vince Flynn--featuring hero Mitch Rapp as he once again battles the forces of corrupt Washington politicians and scheming terrorists.

Director Stansfield of the CIA is dead, and the president has named Dr. Irene Kennedy as his successor. What should be a relatively easy confirmation is about to go awry. As the story unfolds, the president, Kennedy, and Rapp find themselves under assault from unknown forces in Washington and from afar. Senator Hank Clark, the chairman of the Senate Intelligence Committee, has gained the president's confidence and is immersed in a complicated plot to bring the president's term to a premature end. To make matters worse, the president is confronted with a crisis in the Middle East involving nuclear weapons. The Israelis have given the president two weeks to take the bombs out, or they will do it themselves. In a race against the clock, Rapp navigates the treacherous alleys of Baghdad and the just-as-hostile streets of Washington, defeating his enemies at every turn, and leaving his customary trail of bodies.