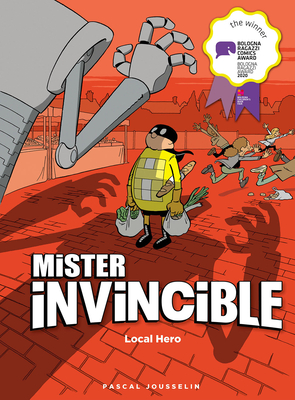 "Mister Invincible doesn't just fight villains. He shows us why comics delight us." - Gene Luen Yang via The New York Times Bologna Ragazzi Award Winner 2020
A Junior Library Guild Selection 2020
Featured in The New York Times
Booklist Starred Review
Kirkus Starred Review
Publishers Weekly Starred Review There's a new superhero in town -- Mr. Invincible Sure, he wears a mask and cape and helps widows and orphans as any self-respecting hero would, but he also thwarts the mad scientists and bad guys with his amazing super-power that makes him the only true comic book hero: he can reach outside the comic strip panels to affect both space and time By breaking the boundaries of 'comic book physics' he and his companions are able to do amazing things that are only possible thanks to the magic of comics A wholly unique and creative twist on conventional comic-book reading experience, this wacky Middle Grade title will put your imagination to the test