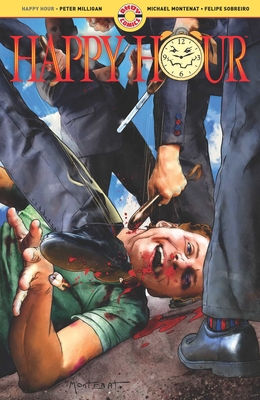 In future America, being happy isn’t just a right—it’s the law. While the Joy Police brutally enforce the cheery code, two young people go on the run, searching for a haven of melancholy where they can safely bask in the blues. A timely tale by superstar writer Peter Milligan (X-Statix, The Prisoner) and artist Michael Montenat (Dominion, Hellraiser Annual).

One-time Entertainment Weekly Man of the Year Peter Milligan was at the forefront of the revolution in comics for a more sophisticated, adult audience. Shade, the Changing Man for Vertigo offered a skewed look at American culture, while Enigma, Face and Rogan Gosh pushed the boundaries of what comic books could do. The hugely-popular X-Statix was a radical reworking of the X-Men paradigm that led to controversy when Milligan tried to recruit the late Diana Prince of Wales into his celebrity-obsessed bunch of heroes; described by Kevin Smith (Clerks, etc.) as “the most well-observed scholarly analysis of media-manipulation filtered through a pop-culture lens ever committed to the page." While the Princess Diana controversy raged, Milligan was perhaps the most hated man in Britain--at least among Daily Mail readers.

Milligan was the longest-running writer of the cult horror comic Hellblazer, and his take on Human Target inspired the TV series. His latest works include the critical hit Britannia, about an Ancient Roman detective, a retelling of The Mummy for Hammer/Titan, and the surreal Kid Lobotomy for IDW.  Currently he is writing a new take on the cult TV series The Prisoner for Titan. Milligan has written several screenplays.

“A timely and necessary story…. Part One Flew Over The Cuckoo’s Nest and part 1984, Happy Hour is a biting satire that explores societal pressures to project false happiness. Written by Peter Milligan, with art by Michael Montenat, it is a comic series that seamlessly melds the writer’s ideas with the artist’s designs, with the biting commentary and dialogue nicely met by the frenetic art style."
— Jonathan Foye

"Leave it to Peter Milligan to come up with something as wildly entertaining and terrifyingly topical as Happy Hour. Alongside artist Michael Montenat, Milligan launches this series with a high-concept dystopian hook that's definitely attention-grabbing, but it's what the team does next that makes it really worth paying attention to. … This kind of concept represents an artistic tightrope, one that not all artists would be able to navigate, but Montenat clears the bar with room to spare. ... This feels like a world-class comics satire in the making."
— Matthew Jackson