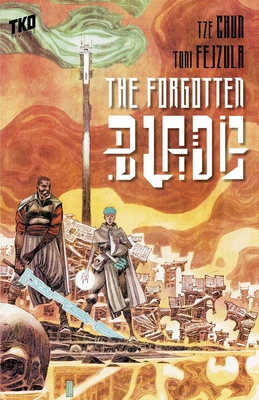 TKO Studios presents "Forgotten Blade" by Tze Chun In the land of the Five Rivers, the magical waters that flow from the Citadel grant the people who know to use them incredible powers. Power that the Church of the Citadel guards jealously and with an iron fist. Years after Ruza the Unwashed, the world's greatest warrior and wielder of the FORGOTTEN BLADE, destroyed the last chance for the people to overthrow the Church's cruel tyranny, he is recruited by a schoolteacher to save the souls of her two children cursed by inquisitors for no crime at all. To do that, they must do what no one has ever done -- infiltrate the Citadel, discover the source of the Five Rivers, and there vanquish the most powerful adversary of all: The malevolent God who created this world in the first place.

Tze (pronounced "Z") Chun is a writer, director, producer, and visual artist based in Los Angeles, CA. Along with Salvatore Simeone, Chun co-founded TKO Studios to modernize the comic book industry, creatively and commercially. Prior to his comic book work, he was a writer/producer on Fox's hit Batman prequel show GOTHAM, and wrote on ABC's ONCE UPON A TIME. He also wrote and directed the award-winning films WINDOWBREAKER (Sundance 2007), CHILDREN OF INVENTION (Sundance 2009) the Bryan Cranston thriller COLD COMES THE NIGHT (Sony), as well as an episode of LITTLE AMERICA (Apple TV+) centering around his mother's life. He is currently co-executive producer and showrunner of an animated Gremlins prequel GREMLINS: SECRETS OF THE MOGWAI for Warner Bros and Amblin, premiering on HBO Max in 2021.