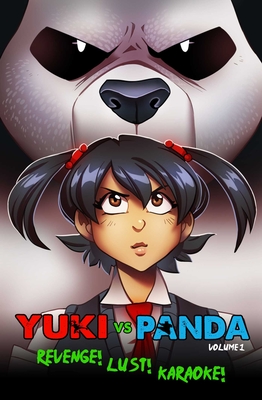 Yuki unwittingly finds herself earning the ire of a murderous panda bear who will stop at nothing to end her life!

Yuki is your pretty average college student; except if you count the stuff about her supernatural powers and the giant panda bear trying to kill her. Collected here are the first three issues of Yuki vs Panda, that introduces the main characters and sets up the inevitable explosive confrontation between the two titans, in this off - the - wall action/comedy that holds the fate of our entire planet in the balance. Choose your side!

Ever the storyteller, Graham Misiurak has always conveyed his affinity for the surreal and absurd through many mediums. Starting out at age 8 drawing fantasy/adventure comics, evolving into horror and avant-garde filmmaking in his early career, and continuing into

irreverent comedy later in life as a writer/producer for Emmy award-winning television.

Now a father of three and probably a bigger geek than ever, he’s come full circle back to his roots, writing comic books which draw on his love of video & tabletop games, anime, superheroes, horror movies, sci-fi and martial arts; always striving to break expectations and make people laugh.