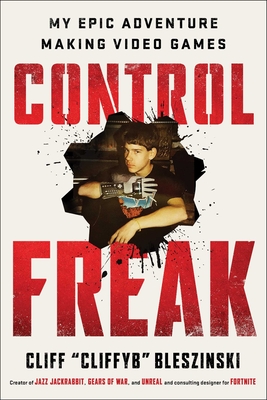 The designer of Unreal and Gears of War offers an eye-opening personal account of the video game industry as it grew from niche hobby to hundred-billion-dollar enterprise.

Video games are dominating the planet. In 2020, they brought in $180 billion dollars globally—nearly $34 billion in the United States alone. So who are the brilliant designers who create these stunning virtual worlds? Cliff Bleszinski—or CliffyB as he is known to gamers—is one of the few who’ve reached mythical, rock star status. In Control Freak, he gives an unvarnished, all-access tour of the business.

Toiling away in his bedroom, Bleszinski created and shipped his first game before graduating high school, and at just seventeen joined a fledgling company called Epic Games. He describes the grueling hours, obscene amounts of Mountain Dew and obsessive focus necessary to achieve his singular creative visions. He details Epic’s rise to industry leader, thanks largely to his work on bestselling franchises Unreal and Gears of War (and, later, his input on a little game called Fortnite), as well as his own awkward ascent from shy, acne-riddled introvert to sports car-driving celebrity rubbing shoulders with Bill Gates. As he writes, “No one is weirder than a nerd with money.” While the book is laced with such self-deprecating humor, Bleszinski also bluntly addresses the challenges that have long-faced the gaming community, including sexism and a lack of representation among both designers and the characters they create.

Control Freak is a hilarious, thoughtful, and inspiring memoir. Even if you don’t play games, you’ll walk away from this book recognizing them as a true art form and appreciating the genius of their creators.

Cliff Bleszinski, former Epic Games Design Director and twenty-five-year veteran of the video game industry, shipped his first commercial title, Jazz Jackrabbit, before graduating high school. During his tenure at Epic, he was a key visionary behind the award-winning, multimillion-selling Unreal game series and the billion-dollar Gears of War franchise. While at Epic, he also lent his creative expertise to games such as Fortnite, ChAIR Entertainment’s Infinity Blade series, and multiple unannounced projects. Bleszinski is the cofounder of Boss Key Productions, which released two titles but ultimately folded. He’s now actively involved as a producer on Broadway and figuring out what's next.

“This book is a fascinating dive into the grind of the games biz. Cliffy started as a fan of mine. And after he put me in his games, I became a fan of his. A solid guy I totally respect.”—Ice-T

“Modern game design is a high-stakes game. Cliff Bleszinski had a prime seat at the table, and won. In Control Freak, he gives us a gripping inside history of the games that have swallowed the world—and more than that, a deeply personal look into the mind and heart of a man behind one of gaming’s all-time greatest hits. It’s fun and heartbreaking and uplifting and real. So read this touching memoir of an eighties childhood and the birth of an artist, from the first person to score 9,990,950 on Super Mario Bros. It’s the highest score you can get. You can’t get any higher.”—D. B. Weiss, cocreator of Game of Thrones

“Cliff Bleszinski’s career happened to exactly coincide with the rise of the modern video game industry, which transformed garage-band designers just out of their teens into multimillionaires. This fascinating and often moving book describes what that bizarre trajectory felt like from inside the rocket ship. But it’s also about childhood, obsession, fear, and failure. I’ve known Cliff for fifteen years. Reading this, I realize I barely knew him at all, and I mean that in the best way possible.”—Tom Bissell, author of Extra Lives and coauthor of The Disaster Artist

“An honest, entertaining look at the life and career of one of the video game industry’s biggest and brashest personalities. Bleszinski offers a surprisingly candid glimpse into the mind of an iconic designer: the ingenuity, the self-doubt, and the tense creative alchemy that makes video games come to life.”—Jason Schreier, New York Times bestselling author of Blood, Sweat, and Pixels and Press Reset

“From NES high scores to scrappy nineties shareware to the top of the triple-A heap, Cliff has been plugged in to video game history his whole life, and now we get to see what makes him tick. I loved this book!”—Bryan Lee O’Malley New York Times bestselling author of the Scott Pilgrim series and Seconds

“Control Freak will win over not just hardcore gamers but those appreciative of a self-deprecating, fun autobiography. Bleszinski’s narrative is as animated as the games he played and created, his life story serving as advice for those looking to leave their footprint in any career.”—Booklist

“[An] entertaining and candid debut…fascinating.”—Publishers Weekly

“Raw and real, [Bleszinski] does not shy away from any topic or censor himself as he shares his troubles with relationships and growth. From his small apartment to his Lamborghini, he shares the ups and downs of working with gaming industry leader Epic. He also provides insight into how major decisions were made in both the games he developed and his own life. Gamers will appreciate the bevy of name-dropping and insider revelations into the evolution of video games and how some popular games, including Unreal and Gears of War, were developed.”—Library Journal

“A behind-the-scenes memoir of the video games industry leavened with insight and self-deprecating humor.”—Kirkus