The Island of Extraordinary Captives: A Painter, a Poet, an Heiress, and a Spy in a World War II British Internment Camp (Hardcover) 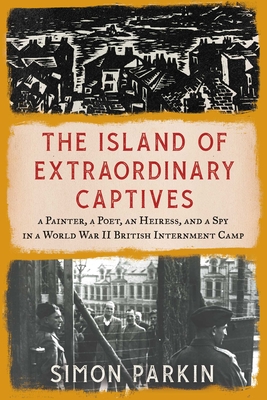 The “riveting…truly shocking” (The New York Times Book Review) story of a Jewish orphan who fled Nazi Germany for London, only to be arrested and sent to a British internment camp for suspected foreign agents on the Isle of Man, alongside a renowned group of refugee musicians, intellectuals, artists, and—possibly—genuine spies.

Following the events of Kristallnacht in 1938, Peter Fleischmann evaded the Gestapo’s roundups in Berlin by way of a perilous journey to England on a Kindertransport rescue, an effort sanctioned by the UK government to evacuate minors from Nazi-controlled areas.train. But he could not escape the British police, who came for him in the early hours and shipped him off to Hutchinson Camp on the Isle of Man, under suspicion of being a spy for the very regime he had fled.

During Hitler’s rise to power in the 1930s, tens of thousands of German and Austrian Jews like Peter escaped and found refuge in Britain. After war broke out and paranoia gripped the nation, Prime Minister Winston Churchill ordered that these innocent asylum seekers—so-called “enemy aliens”—be interned.

When Peter arrived at Hutchinson Camp, he found one of history’s most astounding prison populations: renowned professors, composers, journalists, and artists. Together, they created a thriving cultural community, complete with art exhibitions, lectures, musical performances, and poetry readings. The artists welcomed Peter as their pupil and forever changed the course of his life. Meanwhile, suspicions grew that a real spy was hiding among them—one connected to a vivacious heiress from Peter’s past.

Drawing from unpublished first-person accounts and newly declassified government documents, award-winning journalist Simon Parkin reveals an “extraordinary yet previously untold true story” (Daily Express) that serves as a “testimony to human fortitude despite callous, hypocritical injustice” (The New Yorker) and “an example of how individuals can find joy and meaning in the absurd and mundane” (The Spectator).

Simon Parkin is an award-winning British journalist and author. A contributing writer for The New Yorker, he has also written for The Guardian, The Observer, The New York Times, Harper’s Magazine, New Statesmen, the BBC, and other publications. He is the author of two prior books of nonfiction, A Game of Birds and Wolves and Death by Video Game, and his work has been featured in The Best American Nonrequired Reading. He was named a finalist in the Foreign Press Association Media Awards and is the recipient of two awards from the Society of Professional Journalists. Parkin lives in West Sussex, England.

"Riveting . . . a truly shocking story of what officials are wont to term 'national misjudgment,' is electrifyingly told by the journalist and historian Simon Parkin, whose breadth and depth of original research has produced an account of cinematic vividness.” —The New York Times Book Review

"Parkin’s account, with its well-chosen central figures and attention to the trauma that some of the imprisoned carried for decades, is testimony to human fortitude despite callous, hypocritical injustice." —The New Yorker

“Parkin [has an] inimitable capacity to find the human pulse in the underbelly of Britain’s war. . . . [The Island of Extraordinary Captives is] a reminder that conflict has always been a convenient mask behind which thuggery and xenophobia thrive. Yet, despite the stark injustice it describes, it is a curiously exhilarating read: an example of how individuals can find joy and meaning in the absurd and mundane.” —The Spectator

“Powerful. . . . vivid and moving. . . . spotlights a sorry aspect of Britain's war which deserves to be better known.” —Sir Max Hastings, The Sunday Times